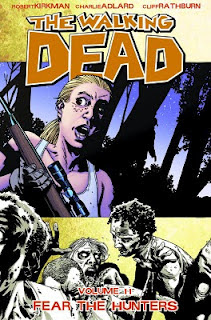 ‘What We Become’ went a long way towards this with Kirkman’s willingness to shock (without overplaying it) working well with Adlard’s artwork capturing the raw emotion and savagery in black and white. While it wasn’t the best collection so far (which has to be ‘Made to Suffer’), ‘What We Become’ certainly set a tough act to follow for the next collection in the series. The good news for fans is that ‘Fear the Hunters’ exceeds those expectations and then some! If you haven’t checked these books out, you really should…

The journey to Washington continues (give em’ a break, they’re going as fast as they can!) with Rick and his band doing whatever they must to stay alive. The land is suspiciously zombie free but is more dangerous than ever before. Rick and his friends must cope with a horrifying revelation within the group as well as the fact that another group is following them with murderous intentions on their minds. Everyone has to eat…

Every time I think that Kirkman can’t possibly top the last book he comes right out and smacks me dead in the eyes with some seriously messed up behaviour in this post-apocalyptic world. The zombies are almost superfluous to what’s going on here, Rick and his friends (along with others) are more than capable of plumbing the depths of human savagery all by themselves.

Living in the middle of a zombie holocaust as a child (who probably can’t remember what it was like before it all kicked off) is the theme of the day here and Kirkman looks at this through the eyes of two of the children in the group. One is mad (or at the very least not thinking straight at all), the other…? Well, you never really know but one thing you can be sure of is that the pressure is beginning to show. There’s a bittersweet ‘innocence lost’ vibe that runs along the slightly insane ‘innocence that adjusts to its surroundings’ and the result will have you really feeling for those of us who have to grow up too fast. ‘Intense’ is not the word for what goes on around this subplot as we see people having to confront hard choices that they wouldn’t have even dreamed of in the past. After the first death, I was surprised that none of the characters thought to stop the corpse reanimating though. Did this happen ‘off-screen’ or have we found something that Kirkman won’t show…? I don’t know…

If that wasn’t enough, the ‘hunter’ sub-plot sees us say goodbye to one of the longer term characters in a way that tugs at the heartstrings as well as making you laugh as you see him have the last laugh on the people who put him in that spot. Again you get to see just how low people will go in order to survive and it leaves you wondering just how far you would go to do the same thing. Cold logic papers over the cracks of insanity while giving in to your rage only hastens that particular journey. At the same time, you also get to spend time with characters that fight to keep their humanity no matter what and this shows the reader that there is hope yet. The downward spiral may seem inevitable but it’s not a path that you have to take.

The final showdown is brutal, just as brutal as you would have come to expect from both Kirkman and Rick Grimes himself. These are desperate times and you know what they call for… Adlard’s art though, as excellent as it is, failed to keep up with what Kirkman was trying to get over to the reader. It’s good but the ‘aftermath shots’ didn’t quite capture just how apocalyptic things just got…

That’s such a small niggle though, so small that I’m almost ashamed to have it there (although it’s staying!) ‘Fear the Hunters’ is a marked step on in quality from ‘What We Become’ (you know how good I thought that was!) and it promises great things for the next collection. The very last pages, in particular, just encapsulate what’s great about this series.