The Walking Dead Volume 10: What We Become 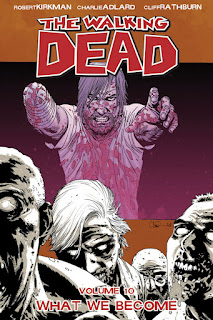 Title: The Walking Dead Volume 10: What We Become

Catching up with Rick Grimes’ continuing struggle to survive in a world newly populated by the living dead was a New Year’s resolution that didn’t really need making a big deal of on the blog. ‘The Walking Dead’ is one of my favorite series. I appreciate my LCS (Tony’s Kingdom of Comics) for keeping me up-to-date on these trades.

Rick and his band of survivors are making their way towards Washington and a possible solution (or at the very least a reason) for the sudden uprising of the living dead. It’s a long way to Washington though and there’s plenty that can go wrong along the way. As always, the zombie threat only comes second to humanity can do to itself when it has been beaten to the ground and has nowhere else to turn. Again, as always, the threat can be found not only in the obstacles that Rick and his friends will face but within the very group itself...

‘What We Become’ is very much a ‘transition piece’ along the same lines of the earlier episodes in the prison. New characters have been introduced and are in the process of bedding into the group and slowly beginning to show what they’re all about. Hard case Abraham is very much the man to watch here with his flying rages hiding a terrible secret that will gain your sympathy. The title says it all here, we get to see what the survivors are becoming and there’s a mixture here of people aspiring to rise above their circumstances while others will embrace their rage and do whatever it takes to survive... As is typical with Kirkman by now, not only do these scenes pull no punches but their sheer intensity leaves you wondering what you would do in similar circumstances. Sometimes, the only way to fight an animal is to become an animal yourself and Kirkman leaves you in no doubt as to what this really means.

Seeds are also being sown for events further down the line. What can constant exposure to the living dead do to a young mind? Especially when it’s clear that death isn’t the final obstacle that it has been in the past... Kirkman leads his readers gradually into this one and is setting up something quite nasty for the near future.

There’s not a lot more that I can say about Charlie Adlard’s artwork that I haven’t said already; the bottom line is that I think it complements Kirkman’s sombre tale almost perfectly. I was wondering though if it might freshen things up to have another artist to have a crack at it, just for an issue or two. On the one hand, why would you mess with a winning combination? On the other hand though... It might make for an interesting change to see someone else’s interpretation.

That’s just me daydreaming on my first day back at work though. Kirkman and Adlard might not be doing anything new but when it’s all being done so well it almost doesn’t matter. Roll on volume eleven...
Posted by John "Zanziber" Rogers at 6:00 AM
Email ThisBlogThis!Share to TwitterShare to FacebookShare to Pinterest
Labels: Reviews