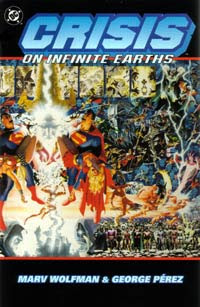 Most fans have at least heard of DC Comics' Crisis on Infinite Earths, the maxi-series that reinvented the "reality" of the oldest consistently publishing comic book company. At long last (well, at the tail end of 2000) DC released the epic in a trade paperback for those who missed it either in its original serialized format, or in its pricey hardcover version.

I had never read the series. In 1985 comics were getting pricey (I had no idea just how pricey they'd become, of course) and the great reads seemed few and farther between. When DC announced it was overhauling its line with Crisis, I decided it was time for me to go, too. Eventually I fell back into reading comics and inevitably my curiosity led me to reading Crisis on Infinite Earths. I mention all this just to put my opinion in perspective -- I read it 16 years after the fact.

The story has a mysterious villain destroying whole universes, whittling away at DC's multiverse -- wherein earths existed in parallel dimensions, each with its own superheroes. An enigmatic, omnipotent being, Monitor, is determined to preserve as many of the universes as possible and gathers together heroes from various universes to help. Eventually the heroes triumph, but the end result is that reality has been remade as a single universe where all the characters either co-exist...or no longer exist.

Crisis was, obviously, an awesome undertaking, a story that attempted to throw in almost every character in the DC catalogue. There probably isn't another artist who could have handled the task as well as George Perez -- certainly not who was working at the time. He crams each page with tiny panels and crams the panels with little details and finely drawn, impeccable figure work, all laid out with edgy panel composition. For pure quantity, you get your money's worth. Writer Marv Wolfman holds up his end by providing lots of dialogue. Sometimes the panels are so small and the dialogue so much that letterer John Constanza has to spill word balloons into neighboring panels. It's a 12 issue series that, in other hands, probably would've been 24 issues.

It's a big spectacle that can be fun just for the sheer number of characters, featuring (literally) an earth-shattering menace, and buoyed by Perez's art, aided by inkers Dick Giordano, Mike DeCarlo, and, mainly, Jerry Ordway (an overwhelming inker, admittedly -- sometimes you can find yourself forgetting it's Perez's pencils underneath Ordway's inks). For older readers, the story evokes all those old Justice League/Justice Society team ups that were an annual event in the Justice League of America comics throughout the '60s, '70s and early '80s.

Is Crisis a great read? Well, no.

There are too many characters. Admittedly that's the point: to squeeze everyone in. Almost everyone gets a line, true, but very few get a lot of lines, or very good lines (even A-list heroes like Batman and Wonder Woman have just bit parts). The plot unfolds a little too linearly -- despite the fact that it leaps around from the far future to the distant past, jumping from reality to reality. Wolfman basically comes up with his premise...then sticks with it for 350 pages. There are some questions that keep us turning pages (who is Pariah? what is the Monitor's plan? etc.) but considering the saga's size, unexpected plot turns are few. There's repetition, particularly in the first half, with too few moments that gel into memorable scenes in and of themselves. The "action" tends to be a lot of scenes of mass fisticuffs.

The use of the god-like Monitor, and some subsequent characters, helps push the story along, but it reduces the familiar heroes too often to being kind of unthinking props who just go where they're told. Considering this was the swan song for some of the characters, it's disappointing. Wolfman also introduces brand new characters, spotlighting them sometimes at the expense of the established heroes. The irony is that most of the original characters introduced have long since faded into obscurity!

The saga is better in the last half than the first, and a couple of double-sized issues (#7 and the concluding #12) stand out, the greater pages allowing Wolfman and Perez to shape more well-rounded chapters.

There are technical lapses, as is probably unavoidable when dealing with the warping of time and space and reality -- spots where you find yourself going, "hey, that don't make sense", or where Wolfman glosses over plot points. And at one point Captain Marvel Jr. refers to Mary Marvel as his "sister" and the Golden Age Superman is more powerful than I remembered. And since this was a "crossover" epic -- one of the first -- there are a few annoying spots where characters wander off and we're advised that their adventure continues, not in the next issue of Crisis, but some other comic entirely.

In the annals of mass slaughter depicted in comics, the hundreds of billions cavalierly wiped out in Crisis is unmatched. To make matters worse, it was not done out of any artistic desire, or to tell a great story, but simply because DC Comics wanted to clean house. I don't want to get too metaphysical, but when the heroes rage against the villain it's hard to get swept up in their indignation. After all, he didn't kill billions...Marv Wolfman did. Likewise, in the series’ most notorious twists -- the deaths of the original Supergirl and the Silver Age Flash (not to mention Dove, Lori Lemaris, Aquagirl, the earth 2 Huntress, and so on) -- there's some of the same ambivalence. It's hard to be entirely moved because it was an editorial more than an artistic decision. Supergirl and the Flash evince an atypical ruthlessness in their last moments, too, which is curious.

Admittedly, all that's from the perspective of reading it years later, when all of this is ancient history. At the time, it might have been more powerful.

There's a little too much of the "Iconanism" that seems to have become prevalent in comics. Where the Marvel Age was all about emphasizing a superhero's humanity, the modern Iconic Age (as I think of it) is more about Wagnerian chest beating, defining superheroes by their being superheroes. Even when Wolfman tries to squeeze in character bits, it's mainly characters reflecting on superheroism. If I read one more character musing what a "true hero" another character was, I was liable to throw the comic across the room. When Supergirl dies, we're treated to a half page eulogy delivered by Batgirl at her funeral -- it's heavy handed, it's expository, it's...Iconic! Far more affecting is a later, understated scene where Brainiac 5 is embittered because of Supergirl's death.

With that being said, #7 (with Supergirl's death) and #8 (Flash's death) are among the better stand-alone issues -- not because of the deaths, but the stories are more focused. Wolfman also shows an unusual sensitivity for continuity by having the Golden Age Superman -- the hero that largely begat the DC Comics empire in 1938 -- take a pivotal role in the climax.

The series was intended to redefine and clarify the DC Universe -- it did neither. Even how the series ends (with the heroes remembering the pre-Crisis) was instantly contradicted by the regular comics (where even Supergirl went unremembered -- this despite Superman vowing to "miss her forever"). Once DC opened the door to "redefining" its universe, new editorial regimes have done so at least twice, so that even hardcore fans aren't really sure what is, or is not, continuity. There's also an uncomfortable tendency to brow beat. Knowing what they were doing was bound to be controversial, Wolfman has the only character who bemoans the changes be a raving lunatic in an asylum. A not-very-subtle way for Wolfman to get in a pre-emptive swipe at his critics.

Crisis is arguably more craftsmanship than it is art, though it may well be as good a version of the story as was possible given the parameters. Is it the classic it is heralded as? Not really. It's a bit draggy in spots and I can think of similar stories, both after and before, that were as good or better. But it's still an enjoyable epic that reminds you when DC Comics' reality was an interesting, diverse place to be.
Posted by John "Zanziber" Rogers at 6:00 AM
Email ThisBlogThis!Share to TwitterShare to FacebookShare to Pinterest
Labels: Reviews