Star Wars: Shadows of the Empire 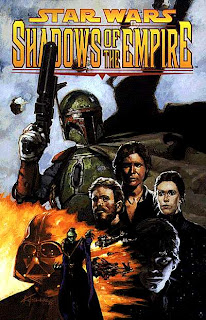 As with the novel, Empire has just ended, Luke and Vader are recovering from their battle in Cloud City. The book opens with the traditional text scroll, in bold yellow across a star scape. Then, the rebel fleet is underneath. It's almost like the credits never started after the movie ended. The book dives right into a beautifully rendered space battle, depicting the heavily detailed star fighters of both the Alliance and the Empire. Already, it feels like we're home.

But following this sequence, the comic diverts its attention from the heroes of the films. Instead, the graphic novel focuses on the villains, both in the Empire and in the underworld, vying for power in some way. The main characters of this book are Jix, an agent of Darth Vader, Xizor, and Boba Fett. Jix isn't very interesting as a character, but his interactions with Darth Vader are. I've already said that Vader comes into a light in Shadows, playing the role of the victim of the Emperor, and setting up for that slave-of-darkness tone present in Return of the Jedi. Jix is the person who draws this out of him to an extent, though not with his actions, but with the commands given to Jix. It's clear that Vader wants his son to live long enough to be with him, though in the service of evil. The more we get of Vader like this, the better. It's a side more common to his character in comics since, especially in The Force Unleashed by Hayden Blackman. Boba Fett is given a lot of focus in this comic, detailing his difficulties delivering Han Solo to Jabba the Hutt. These parts often give some humor to the book, as Fett speaks to the carbonite encased smuggler, complaining about how much of a nuisance he is. Whether it's intentional or not, you can't help but chuckle at the fan favorite talking to what is essentially an inanimate object. When he's not making himself out to be crazy, he participates in some exciting battles with other bounty hunters, reminding everyone how crafty and generally awesome he is. Sadly, I don't feel like he's given enough as a character, but that's just an aside. This is Star Wars after all, and we can't get such depth with every character.

The writing is on the higher end of the nineties Star Wars comic grade of quality. The characters don't step outside of their personalities, and the scenarios are well constructed and interesting. He keeps Dash Rendar from taking center screen too much, and even provides some exciting, tense sequences of action from time to time. However, his best work comes from the behind the scenes deconstruction of the Empire through Prince Xizor. His actions prove important to what happens in the series following the books end, and that's an admirable quality for the book to have given it's important placement in the time line.

Killian Plunkett's art is pretty good, though not amazing by any stretch. While ships, vehicles, and environments are drawn beautifully and technically, characters often have minor imperfections that could have been cleared up with a slightly higher attention to those details. The covers for all six issues are beautiful, and are included in the last pages of the trade. Overall, I must recommend this book, even if you don't intend to read the novel. It works as a standalone story well enough. It has recently been reprinted as part of the Shadows of the Empire Omnibus by Dark Horse. Also included in the Omnibus are the sequel to Shadows, Evolution, and a Mara Jade mini-series that I may review at a later time on this site.

On the whole, the Shadows of the Empire multi-media event levels out as being a highly entertaining, though slightly flawed experiment in how LucasArts would market its later projects and sell their stories. However, unlike more recent Star Wars works, this feels like Star Wars. The conflicts, characters, and even the music feel like I've been taken back to that galaxy, far away. If you have the time for the whole experience, I fully recommend it. However, the lone comic is the easiest and the only of the books that can be taken in as a singular work, not dependent on the events of the game or the novel to tell the complete story it's trying to tell. It's a fun trip, and you will learn some new things about how the galaxy really works.
Posted by John "Zanziber" Rogers at 6:00 AM
Email ThisBlogThis!Share to TwitterShare to FacebookShare to Pinterest
Labels: Reviews