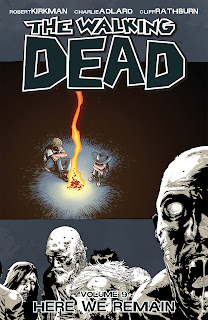 Where do you go with a story after you’ve pulled your characters out of their comfort zone and killed around half of them in the process? Having built up a real momentum in ‘Made to Suffer’, Kirkman couldn’t afford to hang around too long and let it die out. Luckily, he didn’t...

Rick and Carl are the only survivors of what went down in the prison. Now they’re on their own and out in a wide world where the next person you meet is more likely to be undead than alive... They’re not on their own for too long but even though the company is friendly their new home just isn’t safe. A chance encounter might just give the group a new direction...

‘Here We Remain’ sees things slow down a little, at least to begin with. This is understandable given that the beginning of the book sees the story focusing on two characters (one of whom is badly hurt) rather than a whole prison full! We have a lot more time to see how Rick and Carl adapt to their new situation and the challenges it brings up. This is especially true of Carl and I found myself beginning to wonder whether the series is actually about the children growing up in this new world rather than the adults who look after them. Given that some of the younger characters can barely remember what the world used to be like it will be more interesting to see how they fit into the world as it is now...

It’s also interesting to see how the events at the prison change the group dynamic and how further events change it yet again. Everyone is looking for leadership but Rick is unable to take that responsibility, it’s questionable as to whether he can take any more pressure at all...
As I said earlier Kirkman doesn’t let the momentum die out, adding new faces to the group and sending them all off in a new direction with a promise of information that readers will have been eager for ever since the first issue. It’s too early to say whether we will find out anything concrete about the zombie uprising but all credit to Kirkman to offering up this bait when readers are still reeling from the prison massacre. It certainly keeps things fresh and moving in a direction that’s worth following.

I’m not quite sure when the next ‘Walking Dead’ collection is released but I’ll be there to pick up my copy. Charlie Adlard’s art (simple yet hauntingly effective) and Kirkman’s writing combine to form some pretty essential reading...
Posted by John "Zanziber" Rogers at 6:00 AM No comments:
Email ThisBlogThis!Share to TwitterShare to FacebookShare to Pinterest
Labels: Reviews

The Walking Dead Volume 8: Made to Suffer 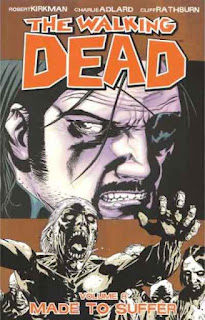 Title: The Walking Dead Volume 8: Made to Suffer

The eight installments of The Walking Dead should be titled: Santa ate the Easter Bunny, then raped the Tooth Fairy and hung himself. Robert Kirkman chose to go with Made to Suffer.

In case you didn’t get it…this story is all bad. I challenge you to have an ounce of happiness left in your soul after reading this chapter. I couldn’t smile for a week. Suffice it to say, set this one down and find a quiet place and get all your cryin’ done before trying to be around other people.

No I won’t even give you a hint as to who, if anybody, is left by the end. However, I will say that Kirkman takes a real chance here. Any of the delicate souls who survived what happened to Michonne a couple of episodes back at the hands of The Governor, might actually surrender after reading Made to Suffer.

What really stood out in this volume, besides the heaping of bad things on out protagonist, was the look into the psyche of a sociopath. If you’ve ever wondered what makes a villain tick, Kirkman gives you a peek behind the curtain. You are able to see how sick bastards like Jim Jones, Adolf Hitler, and David Koresh get inside people’s minds and distort reality to fit their twisted agendas/ (yeah, boo-hoo, I made a list of controversial figures that some people won’t like. If you read zombie fiction and THAT offended you, try the Twilight Series.)

When you reach the final page of this one, you may almost dread picking up the next one. Of course…like me…many of you will continue on like a battle-weary veteran. However, unlike when I first read it, you can pick up volume nine and dig right in. I actually needed those few months to digest all that transpired.

Do yourself a favor: take the time to re-read this issue. It deserves the time and you may be able to savor the amazing ability of Kirkman to reach down and pull out a part of your heart and spirit. Those who may have doubted my earlier claims that Robert Kirkman is indeed the new king may finally see what I’ve seen for so long.

I only have two words for Mister Kirkman before digging into the next offering: Thank you!
Posted by John "Zanziber" Rogers at 6:00 AM No comments:
Email ThisBlogThis!Share to TwitterShare to FacebookShare to Pinterest
Labels: Reviews

As I have mentioned before, there have been several times in the past where I have had to sell pieces of my collection to pay the bills. I have gone through many comic books, trades, books, role playing books, collectible cards, action figures and various other collectible items. Most times, I don't miss them and end up reacquiring them later on when life has turned a corner and gotten better.

There are some items that I lament selling because I now realize they were unique and I'll probably (or defiently) never be able to replace them. I still have pictures of much of what I had. These images haunt me.

[FYI- I apologize in advance if this sounds too EMO.]

Several years ago, I was unable to attend Emerald City Comic Con, but found someone who was going and took some books to have signed for me. Several of those were Lady Death variants that I requested to have Brian Pulido sign. I had them graded because they were so very prized. One even came back as Gem Mint 10.0! A few months later, I had to sell them on eBay to pay the bills.

Before that, I had sent some of the chromium Lady Death cards for Chaos! Comics to be signed. They represented the covers for the original Lady Death mini series. When they were returned, they had the signatures of Brian Pulido, Jason Jensen and Stephen Hughes. I was very greatful that my request had been granted and it wasn't until after Stephen Hughes passing that I began to regret selling them only a few years prior.

When I was in high school, I had decided to have a complete collection of Uncanny X-Men comics starting from issue #200. I worked on this goal for several years after high school until I received a collection which contained several issues prior to #200. I changed my goal to collecting everything from #100 at that point. I had several of the key issues up until I stopped collecting around the time of the Age of Apocalypse. I am proud to say that I still have the issues I had signed by John Romita, Jr. and Fabian Niceza the one time they came to the Portland Comic Book Show.

As many male members of my generation, I grew-up with Star Wars action figures. I had a large collection of them, and several of the vehicles. I didn't keep them in excellent condition, but they did survive to my adulthood. The last time I had a table at the Portland Comic Book Show was the last I saw of most of them. I still have a few vehicles (including a Millenium Falcon) stored away in my parent's attic.

At my last position (as of this original posting), I began collecting the vinyl Muggs figures. I had them all displayed at my desk. When I left, they went with me... neatly packed into 3 boxes. Within a month, they were all sold on eBay.