The League of Extraordinary Gentlemen Volume 2 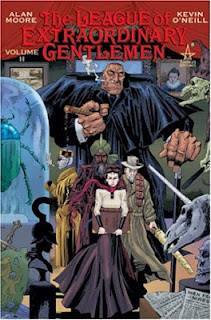 Rating: 3.5/5
It’s a point worthy of argument, but in our minds The League of Extraordinary Gentlemen is the best thing to come out of Alan Moore’s America’s Best Comics imprint. And this second volume does nothing to disappoint. Taking H. G. Wells’ classic Victorian sci-fi invasion story The War of the Worlds, it documents the League’s ‘behind the scenes’ role in fighting the Martian threat, creating a kind of alternate fiction within the original story.

The first scene-setting chapter is something of an anti-climax after the high level of anticipation left by the first book but the pace is quick to ramp up. Moore threads his plot carefully through Wells’ original story, paying homage as he subverts and twists. He also plays with our perceptions of the Victorian literary characters, making them all the more human with flaws and complexities, showing sides that their original creators would probably never have dreamed of portraying.

As with the previous volume Moore has plenty of fun drawing in coincidental Victoriana, though it’s a little more opaque this time round, with more for the enthusiast and less for the occasional reader. For the those stuck between the two, we heartily recommend Jess Nevins’ annotations to anyone with an interest in the detail behind the story. There’s also a weighty prose section at the back of the book, pertaining to be an almanac of the world that Moore has created, which binds an incredible level of detail into this fictional Victorian backdrop. It’s almost as if Moore is demonstrating that, if he wanted to, he could go on writing this stuff for the rest of his days. If only.

O’Neill’s art is as beautifully disturbing as ever, perfectly suited to this dark landscape of fictional past. His Martian tripods are threateningly spooky but thoroughly authentic to Wells’ originals, while his characterization of the League themselves is magical.

This is Moore and O’Neill at their best, subverting and poking fun at fictional history while clearly maintaining a high regard for it. Only someone with a keen interest and reverence in the subject matter could create something as reverential as this, while simultaneously letting the imagination run riot. Both Moore and O’Neill have the balance between these two sides of their craft so finely tuned that they are barely distinguishable, making this a unique, intelligent and gripping work that we can’t recommend highly enough.