The Sandman Volume 10: The Wake 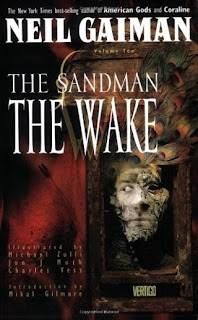 Title: The Sandman Volume 10: The Wake

In the final installment in Gaiman’s Sandman series, we read the story of Dream’s wake. Or at least, the three first chapters are about Dream’s wake. We meet up with a number of people who we were introduced to in previous installments, and even get a few cameos of other DC comic book characters (Clark Kent, Batman, etc.).

The last three chapters in the book are all stand-alone stories in the Sandman universe. I think this book was one of the stronger ones in the series… but that said, it wasn’t without its flaws. I really wish the three standalones had been included elsewhere in the series, because the series ended so perfectly after the wake. SO perfectly – normally, I hate the sort of endings that implies everything was a dream, but since the series is about Dream of the Endless, WELL, it was so very, very fitting.

I also quite liked the fact that we got to see other characters again – though I have to admit that because there are so many characters and it’s taken me so long to read through the book, I forgot who half of the characters were… Whoops.

I feel like I have to go back and reread the rest of the series again.

As for the last three chapters… well, they could not capture my interest. It felt as if the story was over before reading them, so even though I tried to get into them, I already had that sense of closure and they felt… well… unnecessary for me.

Wish that this had ended after the third chapter, In Which we Wake…. it was a perfect ending to the series right there. The rest seemed like “oh yeah, I forgot to tell you this story.” Anyway, other than that, was totally a solid ending to a wonderful series.