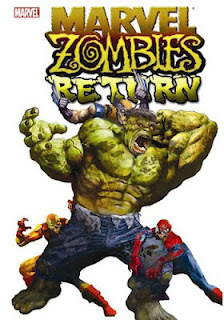 After disappearing for the 3rd and 4th series, the original Marvel Zombies return for this series Marvel Zombies Return. This series takes place right after the events of the story in Marvel Zombies 2 when the infected superheroes are thrust through the time and space gate. They now find themselves displaced on Earth-Z in different times - past, present, and future. This new development gives the series a new sense of vitality as a whole group of writers and artists have been brought on board to craft each of the series individual chapters which each focus on a different infected Marvel character (Ch. 1 - Spider-Man, Ch. 2 - Iron Man, Ch. 3 - Wolverine, Ch. 4 - Hulk, and Ch. 5 - the Avengers).

Although each individual chapter focuses on a different character, there is a unifying story to be told as zombie Spider-Man tries to redeem himself by ridding the world of the zombie plague once and for all. As written by Fred Van Lente, David Wellington, Jonathon Maberry, and Seth Grahame-Smith, this story is as strong as the previous entries in the series. On board in the art department is Nick Draotta, Andrea Muth, Jason Shawn Alexander, Richard Elson & Wellington Alves, and Scott Hanna whose artwork compliments each of their assigned chapters. This is a series that could have easily gone wrong but the final product is one that the Marvel Zombie fans should be proud of.

This graphic novel collection is also one of the best as it not only provides all the covers for the individual issues but also has extensive interviews with many of the creators behind the series which include Van Lente, Mark Millar, Victor Gischler, and Grahame-Smith. Whether Marvel continues to mine the fertile franchise or not this would be a great way to go out on a high note.
Posted by John "Zanziber" Rogers at 6:00 AM
Email ThisBlogThis!Share to TwitterShare to FacebookShare to Pinterest
Labels: Reviews