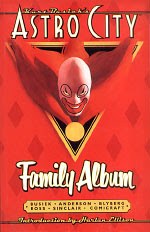 This trade has four distinct stories and their only connection is that they happen in Astro City.

In the first story, a man and his two daughters move to Astro City from Boston. They are trying to get used to seeing all of the super folk and the super level fighting around them. The man, Ben Pullam, and his daughters are all normal people and Ben feels quite inadequate compared to the super people, at least at first.

The second story centers, finally, around actual super people: Astra who is the 10-year old, super powered girl of the First Family. Astra and the rest of the First Family live in their own place with lots of technological gadgets and away from other people. Astra wants to know other kids and to play ordinary kids’ games, so she decides to go on her own adventure in a nearby school. Unfortunately, her parents are worried sick about her and think that she’s been kidnapped. We also get the First Family’s brief background story.

Then another one issue story which is about supervillain called the Junkman. He was a successful toy designer until he was put on retirement and decided to design gadgets for his own good. His first robbery is a success but somehow that’s not enough for him.

A bit longer story centers on Jack-in-the-Box. He meets his three sons which have all come from a possible future. One of them has modified himself through cybernetics in order to kill his father. The son is embittered and somewhat insane because his father died before he was born. The second son is also just as embittered and somewhat insane. However, he has studied Jack, and what Jack has said and done has become a religion to him. The second son is out to bring bloody justice to every law breaker and when he realizes that Jack doesn’t want him to kill anyone; he teams up with the first son and tries to kill their father.

Jack realizes that his eventual death will have dire consequences to his family and has to re-think being hero all over again.

The final short piece is about an animated cartoon character Leo and his sad story in Hollywood and outside it.

All of the stories were at least interesting. I enjoyed especially Astra’s tale because of the obvious parallels with Fantastic Four. I was a bit surprised that she looks completely like a human, though, when her grandfather is the prince of Animal-Men and her father looks like Ben Grimm. Then again, all comics’ women look the same, even when they aren’t mammals.
Posted by John "Zanziber" Rogers at 6:00 AM
Email ThisBlogThis!Share to TwitterShare to FacebookShare to Pinterest
Labels: Reviews