Death: The Time of Your Life 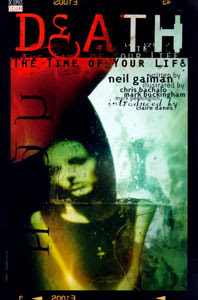 Title: Death: The Time of Your Life

Neil Gaiman has a wonderful gift of taking the profane and giving it life.  I have been slowly making my way through Gaiman’s Sandman graphic novels thoroughly enjoying the rich and mystical world he has created.

One of my favorite characters in his series is the Sandman’s older sister Death.  Other personifications of Death have been of a man in a dark cowl carrying a scythe.  Many stories about Death are of how the Grim Reaper was outwitted, as death is something to avoid, escape and cheat.

As he has done time and time again Gaiman takes the myth and turns it on its head.  Gaiman’s Death is a perky, optimistic and loving woman.  She dresses like a goth but does not have a gothic temperament.  Instead of being menacing she welcomes you into death with a loving embrace and a smile.  It is odd to describe the character of Death to be as full of life but she is

The Time of your life is a spin-off from the Sandman comics focusing solely on the character of Death.  Foxglove and Hazel, other characters from the Sandman comics, appear as well.  In this issue Foxglove has become a famous rock-star and Hazel is a stay at home mother, pretending to be Foxglove’s secretary rather than her lover.  Hazel's tries to make a deal with Death to extend a life and Foxglove travels to the shadowlands save Hazel.  This issue takes the reader through a journey of life, death and dreams.  It is explained that there is no balance to death, no taking of one life for another, as death is inevitable.

The graphic novel is illustrated beautifully and it is easy to see how Gaiman and his team have created a series that is widely praised and timeless.  I thoroughly enjoyed the deeper exploration of Death’s character with an issue to herself and no Sandman.  Four out of five stars.