I recently found a cache of trades that I either haven't seen in years and thought I had sold, lost or never had. Because of this, I wanted to post an update of my collection; starting with a list of the trades that I have already posted reviews for.


And here's everything else in my collection that I've either read and haven't posted a review of or have yet to read:


I think I may have missed some trades that I've actually posted reviews for. If you find any on either list that are miscategorized, please let me know so I can make the change. As you can see, I still have a lot of work ahead of me. Thank you for all your support.
Posted by John "Zanziber" Rogers at 11:02 AM 1 comment:
Email ThisBlogThis!Share to TwitterShare to FacebookShare to Pinterest 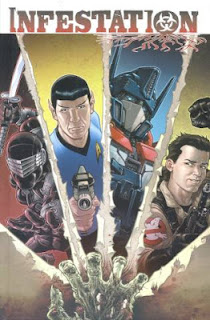 While reading this trade, all I could think is that IDW was trying to capitalize on what Marvel has with the Marvel Zombie line of trades. I think they were hoping to draw pop culture interest by using Transformers, G.I. Joe Star Trek and Ghostbusters where Marvel simply used their classic characters. I don’t feel that they had the same draw that Marvel did.

The art is okay for this trade, even though I suspect that they didn’t utilize the already existing artists from the specific titles. I’ll be honest that I don’t follow any of the regular titles of than G.I. Joe. I think this fact should have been a key indicator of the level of quality contained within. If they didn’t have enough faith to put the professionals who drawn these characters on a frequent basis, then there’s probably not much hope for the series.

Each section has a different spin on how the infection is spread, with the connection being a vampire named Brit from a group called CVO. That’s where it all begins, and that’s where it ultimately “ends”… or does it. The ending leaves it very open to future infestations.

There’s not much that can be said about this particular trade. You could live well enough with or without this trade in your collection. I’m not convinced that it adds enough to give it a glowing nod to go out and have you add it, but it also doesn’t detract.
Posted by John "Zanziber" Rogers at 6:00 AM No comments:
Email ThisBlogThis!Share to TwitterShare to FacebookShare to Pinterest
Labels: #ThrowbackThursdays, Reviews 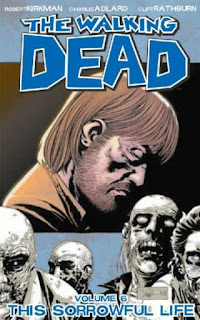 How many happy moments can you expect when Volume Six of The Walking Dead series is titles: This Sorrowful Life? The trio of Rick, Michonne, and Glenn are still being held in the small, fortified section of the town of Woodbury by a man who calls himself Governor. Things are not going well.

You can’t unbreak an egg, and Robert Kirkman has stomped on the whole damn dozen. The level of disturbing imagery eclipses the previous volume: The Best Defense. The zombie makes a few appearances as well after being relegated to the background for a while.

Plainly put very little that occurs in this arc of the story leaves you with any ‘warm fuzzies’. The Governor is twisted and sadistic. In short, a perfect villain. A few new supporting characters are dropped in , bt this is the episode that defines Michonne. I don’t do spoilers, but I will say that it is quite possible that her elevator doesn’t provide service to the top floor.

It’s been a while since I mentioned Cliff Rathburn and it is worth a line or two here to express just how fantastic he is a t rendering some very gruesome scenes. There are occasions where I have to struggle in discerning some of the female characters, but overall, his work adds a very visceral and cinematic quality. If I’m being completely honest, until Walking Dead the only graphic novels or comic books I’d read since the Sgt Rock days of my childhood was Sin City. This series has acted as a gateway for me, shedding light on such wonderful offerings as Marvel Zombies, Laurel K Hamilton’s Anita Blake conversion, and the Dark Elf (Drizzt) stories by R. A. Salvatore.

By the end of This Sorrowful Life there is a sense of impending doom hanging over the story. If you were following the story closely by this point (which I was) you wonder if the next volume will be the dramatic, If not tragic, finale. Since there are at least five more volumes (volume sixteen was recently compiled and released) I’m not giving anything away.

This Sorrowful Life lives up to its title and cinches tight the emotional bonds between reader and character. If Kirkman has taught us anything, it’s that heartbreak has to be on the horizon.

Posted by John "Zanziber" Rogers at 7:24 AM No comments:
Email ThisBlogThis!Share to TwitterShare to FacebookShare to Pinterest
Labels: Reviews 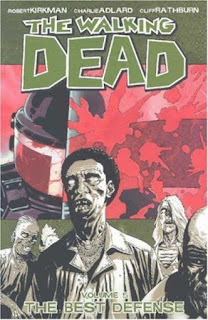 The Best Defense is volume five of Robert Kirkman’s The Walking Dead graphic novel series. It is this episode that I foresee considerable problems in converting it to a television show. More on that later.

Rick Grimes’ proclamation at the end of The Heart’s Desire that “we are the walking dead!” was the dramatic conclusion to a lengthy speech. The story picks up a short time later. The rift in the camp between him and Tyreese remains and things inside the prison actually seem to be proceeding. I was left to wonder about any possible intent or meaning behind such a dramatic line. I won’t say I was disappointed in Kirkman, only, I was expecting…something.

Be that as it may, the story picks up as the survivors start making g a real effort to set up house in the confines of the prison. Having found a generator, there is a small mission just outside the fence to the parking lot to search for gasoline. A passing helicopter just happens to start smoking and crash nearby.

I felt the plot device just a little two convenient, but not enough to distract me from the story. Rick, Michonne, and Glen go to investigate. That’s where I got annoyed. With a wife who is expecting, a son, plus the fact that he’s taken quite a beating recently and only has one really good hand; Rick seems to think nothing of literally just running off. He doesn’t even take the time to tell his wife and son, “farewell, be back soon.”

Yes, I still think the series is spectacular, and yes, I still think Kirkman is the new King. However, I think he stumbled in the plot just a bit here. That could be me speaking as a husband and parent, but Rick Grimes has been portrayed as really loving his wife and son. His regular occurrences of abandoning them to run off on some mission might be explainable as him not thinking anybody can do the job right save himself, but that doesn’t fit with the character.

Anyways…that’s me nitpicking. The story does take an even darker turn here when another camp of survivors is discovered. They are led by the evil bad guy we’ve all been waiting for. Yes, the series finally has its Savini-esque character. The misery he inflicts on the trio of Rick, Glenn, and especially Michonne is where the televised version of this is going to have to get creative. Cable or not, some really bad stuff happens here. And what happens to Michonne is just a part of it. The gloves really come off in The Best Defense. The material in volume five definitely caries a strong ‘R’ rating.

Once more, Kirkman gives us a bit of a cliff hanger ending. All indication are that very bad things are about to pop off in volume six. With his fearlessness when it comes to killing main characters, it is safe to expect the worst.

Posted by John "Zanziber" Rogers at 8:18 AM No comments:
Email ThisBlogThis!Share to TwitterShare to FacebookShare to Pinterest
Labels: Reviews 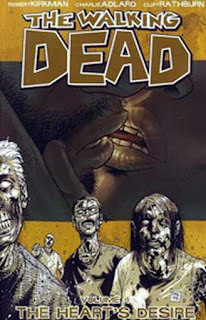 I’ve loved and obsessed over Kirkman’s The Walking Dead series and the previous three collected volumes have not disappointed at any level. This fourth volume collects issues 19 through 24 and is appropriately titled The Heart’s Desire. We pick up from the cliffhanger that ended the third volume (Safety Behind Bars) as Dexter gives Rick and his group a choice that bodes nothing but death either way he chooses: stay and be shot or leave and take their chances with the zombies outside the fences.

The book starts things off with a bang as Rick realizes that Dexter’s success in getting guns of his own has let loose a bigger set of problems as zombies from a locked wing of the prison was accidentally let out. What happens next as Rick’s group and Dexter’s group fight to stay alive shows a new side to Rick that surprised me a lot. It puts a new wrinkle on Rick’s rule of “you kill, you die” and will have long-reaching ramifications deeper in the story. It is also in this heart-pounding sequence that a new face is added to the mix in the form of a female survivor whose mode of survival, to say the very least, is interesting.

The rest of the book really deals less with the zombies but the emotional consequences of many of the characters’ actions from the very start of the series all the way to point of this volume. I can fully understand the disappoint many fans have with the direction the series took with all the drama and soap opera kind of twists and turns of the heart, but I think people fail to realize that Kirkman is writing about the human condition rather than just about zombies. Sure I got a bit impatient with all the emotional crisis and the meltdowns by almost everyone involved, but I can also understand why they’ve been acting the way they have. I think if Kirkman had written a bit more of zombies and death in this part of the series people wouldn’t be complaining much.

Kirkman himself has already admitted that zombies wasn’t what the story was all about, but just a part of it. With the group in relatively safety within the secured fences of the prison and some sort of artificial normalcy starting to come back to the group he needed a way to continue the conflicts that make for good drama. What else but let the pent-up emotional baggage everyone has been carrying since issue 1 to finally come to boil. Part of me didn’t fully enjoy this new arc in the series, but not enough to be disappointed with the end result. Hell, even with all the drama Kirkman still came up with one of the best fight scenes in the series a la Carpenter’s They Live and South Park’s “Cripple Fight” episode.

The Heart’s Desire was not as great as the previous three collected volumes in the series, but it still told a good story though with a bit more drama than most fans of the book were willing to take. I myself enjoyed the book enough that it wasn’t a waste and I was a bit surprised and shocked at the observation Rick finally made and shared with everyone at the end of the volume. I know that after all the emotional trials and tribulations everyone in the series went through in The Heart’s Desire and how the arc ended there’s nothing left but up for the series.
Posted by John "Zanziber" Rogers at 6:00 AM No comments:
Email ThisBlogThis!Share to TwitterShare to FacebookShare to Pinterest
Labels: Reviews
Newer Posts Older Posts Home
Subscribe to: Posts (Atom)