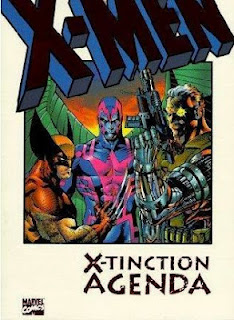 Title: X-Men: X-Tinction Agenda
ISBN: 0871359227
Price: $24.95
Publisher/Year: Marvel, 1992
Artist: Jim Lee, Rob Liefield, Jon Bogdanove
Writer: Chris Claremont, Louise Simonson
Collects: Uncanny X-Men # 270-272, X-Factor # 60-62, New Mutants # 95-98
Rating: 2.5/5
The X-Men along with the New Mutants are ambushed on the grounds of the X-Mansion by highly trained and heavily armed soldiers. Several of their members are defeated and captured with X-Men leader Storm being among them. Cable and Forge join forces with X-Factor and devise a plan to rescue their teammates. They soon learn that their teammates were captured by soldiers of the slave island Genosha, which is being manipulated by a man who was once thought dead, but resurrected as a cyborg killing machine, the leader of the organization called The Right, Cameron Hodge.

The main antagonist, the Genoshans, do come off as a band of Neo-Nazi's, and their leader Cameron Hodge draws many similarities to Hitler. He's evil, mad, and just plain cruel. The character is very well developed, and the reader will have a very good idea on how he thinks very early in the arc. He's very sadistic and takes joy in the mutants suffering. The island of Genosha is also well developed, and mutants aren't just made into slaves, but they're also mind wiped of all memories, their heads are shaved clean, and they're given roster numbers for names. Some of them are even treated like dogs, by being used as trackers to sniff out fugitives. Magneto's hellish world of mutants becoming slaves for mankind, something he fought so hard to prevent has become a reality.

Cameron Hodge isn't only well developed in personality, but also as a legitimate threat. His cyborg body which has the appearance of a spliced spider and scorpion, proves to be quite formidable, as he gives the X-Teams a serious hard time. He even defeats a number of them during this story.

The writing has its moments mainly in the beginning and the story moves at a good pace. There are plenty of action filled moments, and some of the panels are just plain brutal; like Cable being nailed to a wall literally, and Wolverine suffering through an impalement. I thought the suspense was done rather well, because things did look pretty bad for the mutants, and one of them were even mercilessly killed. The writing also had its bad points with a poor plot device, that just seemed to come too much out of nowhere, and really didn't make much sense to me. At least the ending received a good amount of build up and the finish was pretty well done.

The artwork isn't even a mixed bag, since the bad clearly outweighs the good. Jim Lee does a sensational job on the X-Men issues, with some very clean lines, meticulous character designs and cool action panels. Unfortunately, the artwork found in the other two series are very bad, with X-Factor clearly being the worst. There are some atrocious and inconsistent character designs. Normally, if a story is very solid to me, then I can sort of ignore bad artwork. Sadly, it's near impossible to ignore some of this doodle.

One thing about crossovers, there's almost always something of relevance carried over. This arc provided several lasting effects such as; the New Mutants transition into a paramilitary team, when Cable would later turn them into X-Force, and their cold demeanor would soon reflect the prejudice world they live in. Wolfsbane becomes stuck in her werewolf form as a result of her brainwashing, and then leaves the New Mutants team to remain in Genosha. She would later go on to become a member of X- Factor which would soon be lead by Havok, after Cyclops returns to the X-Men with all of the original X-Factor members due to the events of the Muir Island Saga, and that arc would also be a new formation of the X-Men team, after they all pretty much disbanded in earlier issues.

X-Men: X-Tinction Agenda is nothing I would consider to be classic material. In fact, I think it pales in comparison to the X-Men: Mutant Massacre, X-Men: Inferno, and X-Men: Fall of the Mutants. But it's still an entertaining read, and the ramifications clearly pushes this away from just an average filler arc. Recommended to X-Men and serious Marvel fans.
Posted by John "Zanziber" Rogers at 6:00 AM
Email ThisBlogThis!Share to TwitterShare to FacebookShare to Pinterest
Labels: Reviews