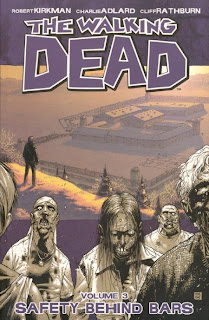 Rick Grimes and his fellow group of survivors think they have found a possible safe haven in a well-defended prison that has a mass of fences and gates that can help to keep them safe and keep the zombies contained. There is lots of room in the yard for growing crops and rearing cattle so the group full of hope make plans for the future.

The prison itself has to be cleaned out of zombies first as it is choc a block with the undead in nearly every wing and there is the surviving inmates who have to be dealt with too.

After meeting the inmates and all the introductions are done it looks like the gang has a new home. Until that is a spate of murders happen and you are left trying to second guess yourself into thinking you know who it is doing them.

The minor characters are given more time to shine through volume 3, Carol and Tyreese seem to be stepping it up a notch in their relationship and Tyreese has to deal with some real serious issues. Allen spirals even deeper into depression and the rest of the group are worried that he might do something drastic to himself, them or even his kids.

There are also four convicts still in the prison which brings some conflict and understandably too as they were there first then all of a sudden here comes Rick Grimes and his lot to try and take over. It also makes you wonder that with the world changed so much are the sins and crimes of these criminals forgiven now that zombies walk the earth and if so which laws are they all ruled under and who decides?

Charlie Adlard is back as the artist and even though i wasn’t his biggest fan in volume 2 i have kind of grown to like him more after this. The prison has been drawn amazingly well and there are some MASSIVE zombie battles in here which just look damn impressive, with the majority of the book set in the prison a lot of it is dark scenes and i could imagine an abundance of darkness can ruin a black and white book like this, but that’s not the case here Charlie seems to be able to play well with it.

One of the things i love about The Walking Dead is that they are not just looking to survive but to live, they want to turn the prison into a home, farm crops and have some normality while still dealing with the zombie threat.

Where volume 3 differs from the previous two is that this is much darker, the serial killer story is very disturbing, and with some sick moments showing that other humans may be a whole lot more dangerous than the zombies. There are also a lot more psychological aspects of trying to survive in a post-apocalyptic world and how each person dealing with the changes are different and cope in many contrasting ways.

In volume 3 the shocks come when you least expect them with a lot of misdirection. There is also a touching subplot of Carl’s love life which is quite beautiful showing the innocence of kids and how a child’s mind can work, for me it was a nice touch of hope stuck in the middle of madness that is the rest if volume 3.

The book ends with a cliff hanger of the two groups facing off against one another and it makes you wish you had volume 4 just sitting there ready for you to continue reading on.
Posted by John "Zanziber" Rogers at 5:06 PM
Email ThisBlogThis!Share to TwitterShare to FacebookShare to Pinterest
Labels: Reviews