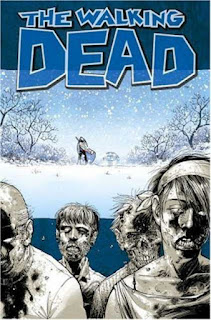 
Miles Behind Us is volume two of the Waling Dead saga. Rick Grimes has been reunited with his wife and son and now acts as the leader of a small group of survivors just outside of Atlanta. In volume two, we see our small band take to the road in search of someplace safer to stay.

Miles Behind Us works very hard to ensure our survivors are miserable. Food is almost as scarce as zombies are plentiful. A few new members join the group early on stretching supplies even thinner. It is from this group that Kirkman takes the time in his dialog to warn that there are some bad people out and about in his zombie-infected wilderness.

The search for a place to call home is the dominate theme in this arc of the story. A gated community proves to be a mixed blessing, but through a tragedy, our heroes come across a farm that offers a brief respite.

There are a few subplots that Kirkman weaves into his tale. The pregnancy of Rick’s wife, Lori, is just one, and not necessarily a cut and dried certainty that it’s Rick’s. There are personal issues that all seem very real and unforced. Some offerings in the zombie genre seem to shoehorn conflict and villainy into the stories. Kirkman brings these sorts of things in, sometimes with something as simple as a panel drawn by Charlie Adlard that will be nothing more than a facial expression on one of the characters.

The story shows how frail we can be as human beings in the emotional department. The patriarch of the farm oasis has a nasty secret which eventually is revealed with disastrous results. Before long, Rick and company are on the road once more.

As with volume one, the story ends with a cliffhanger. There is a possibility that they’ve found a place to call home, although in a very unlikely locale. Fortunately for newcomers to this series, the wait for resolution is brief.

Miles Behind Us does a wonderful job of taking us deeper into the minds and personalities of the cast of characters. New faces are added while familiar ones meet their gruesome ending at the hands and teeth of the undead. By now, any reader of the series should be on the verge of addiction.
Posted by John "Zanziber" Rogers at 6:56 AM
Email ThisBlogThis!Share to TwitterShare to FacebookShare to Pinterest
Labels: Reviews