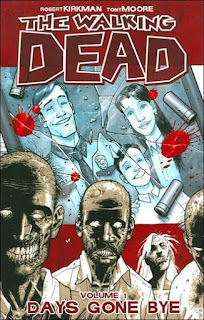 Zounds to all you zombie fans! You know, I have seen a lot of zombie movies. I find something very heart warming abut the living dead's hunger for human flesh. So it takes a lot for a zombie story to stand out nowadays. Robert Kirkman's The Walking Dead has gained a lot of fame and praise, even winning an Eisner of all things. I never thought I would see a horror comic win one of those. But, is this corpse fresh and ready for a feast or is it picked clean? Floss those gums because we are going to dig in!

The story is centered around Rick Grimes and his group of people, along with his wife Lori and son Carl, as they travel around America trying to survive on a day-to-day basis. The story opens with Rick discovering the undead in a hospital as he wakes up from a coma. From there the theme of survival is immediately introduced.

It is nice to see actual survival storytelling in the case of zombies. More often than not, we get a zombie story that lasts all of one night or a few days. The one thing I like a lot about The Walking Dead is that since it's an ongoing, we are never pinned down to one place or area. That is the one thing that hurts a lot of zombie movies for me personally.

I figure if a Zombie apocalypse hit Earth then the survivors would have to keep their smarts in order to keep moving. It's nice seeing Kirkman take that idea and applying survival skills, like hunting, into the story. This is exactly what survival horror is all about. Not every problem involves a zombie. Sometimes, they cannot find any food or their RV is low on gas.  Those problems are just as big, if not even bigger at times, than dealing with the undead.

One thing I have to praise is that the undead are actually called zombies in this series. I do not know why, but lately people seem to find the word "zombie" in a zombie story taboo. Like it's too silly or something to call the undead flesh eaters anything other then "Them" or "They" or "The Monsters." Zombies are zombies, dammit.  If the writer is going to ignore that then they might as well not even have zombies in the story.

In the first story arc, we actually learn a good deal about the undead. Kirkman has some smart ideas like zombies not attacking other zombies because of the smell of rotten flesh. Also, a really interesting concept is that the zombies can somehow be cured. Kirkman is not going with the blank boring undead and not trying anything new with them.

I have yet to read the rest of the series (the next few hardcovers are at the top of my order list) but I can only hope that Kirkman continues to use zombies in a more fashion than just having them stumble around and groan as they try to eat someone. Already, Kirkman has shown, early on in the series, the initiative to do something new and something that feels more worthwhile.

The first two story arcs are collected in this hardcover and both are great for starting off what is one of the most popular comics out nowadays. Kirkman builds up a great cast of characters and sets up the end of the world nicely. The reader gets that same feeling of doom and gloom that they should get from the zombie apocalypse, but without that generic feeling that others would give it.

The reason the Walking Dead works so well as a survival horror story is not simply because it has got the survival and the horror aspects down perfectly. The Walking Dead works so well thanks to its cast of characters. If the group was not as well developed and interesting to follow I do not think I would give a damn about this series and that is the key to liking any good story.

A good main character is needed, of course, but if everyone around him is bland or uninteresting then why bother? Rick is a great main hero for the series and he is definitely memorable. But, he is not really my favorite. That would probably be Dale. Such an awesome old man who is not afraid to say what everyone else may be worried about.

The characters are what make it all work so well and make it such a memorable read. Even the lesser developed characters are still fun to read and when they get their five minutes to shine they shine brightly. The cast does not always see eye to eye and there is plenty of death around them, not just the zombies mind you.

I hate to spoil it, but I will say this: People die.  No one in this group is any safer than the other person. Someone can die just as soon as they say their name. People in this group die. Some people you can say you saw coming other deaths, other deaths will shock you. No matter what, the group remains a strong cast and over time you feel the same pain from their losses as they do.

Every character death impacted me as a reader. That does not happen as often as I am sure people would like it to. It's easy to make a cast in a horror story and kill them off every now and then.  More likely than not, I simply will not care about the deaths. It's common really in a horror story to have a large group just to kill someone off and that happens often to the point where I feel nothing with their deaths.

That is not the case with Walking Dead. Every death has a ramification on the group and affects them each differently as time passes. Nothing is quite the same when someone dies and no one just moves on and acts like that person never existed. It is one of the strengths of any good horror story when you care about the characters enough to feel sad when they die.

Never once did I not mind a character death or not feel sad at the group's loss. Sure some of the people that die are not saints, and some of them are even characters I really did not like. But, rather than being that cliché horror movie asshole or jerk, they are still real people that died and did not deserve to die the usually cruel way that they do.

As more people succumb to the undead the more change you feel affecting the group. That is something the writer has got to do to make the reader care. If the group just moves on and act like no one has died and that everything is fine then it is hard to get the reader to feel invested in the characters or story. For that, I applaud the Walking Dead for its great character work.

There are a lot of moments I would love to spoil just for the sake of praising them.  In these twelve issues, Kirkman always succeeds in delivering twists and turns and makes each new story development as interesting or more interesting than the last one. Sure, we are not always dealing with the undead, but sometimes reading about these characters and their reactions is just as interesting as a zombie attack is to read.

The cast grows at times and it loses people at times. Newer characters in the second story arc like Tyreese are as well developed as earlier characters like Dale. I really grew attached to all these characters over time and found myself enjoying just about every moment involving them talking or doing something, even as mundane as just sitting around talking about random past stories makes for a good read.

With the magic of the internet, I was able to find out future plotlines when I checked sites like Wikipedia. I know who lives and who dies and that was one of the big reasons that kept me away. Since I had been spoiled on later events, I feared I would not be able to enjoy the story knowing who will be dying.

I am glad to say that is not the case at all. If anything, I can appreciate the early stories even more knowing who is going to die thanks to how well Kirkman develops the group so early on and makes me care so much about the characters.

I have to mention that one of the things I really love about this series is the black and white art style. I do not know if Kirkman wanted it in black and white in homage to "Night of the Living Dead" or not, but if he did then congratulations.

One thing that bugs me about this series is that I honestly cannot imagine reading it on a monthly basis. Most people tell me this series reads better in trades and I can see why. There is no pause in between issues to tell which is the start of one issue and the end of another.  Honestly, The Walking Dead reads perfectly like an actual graphic novel, not a collected comic book series.

I've been interested in reading Walking Dead on a monthly basis for a while now, but I think it is best left as a trade-wait. I will be picking up the rest of the hardcovers that are out right now.  This definitely seems like a much better way to read this series.

Aside from the great black and white artwork, both artists, Moore and Adlard, fit this title perfectly. Moore's style is more animated in nature so the transition from it to the more rough realistic type artwork that Adlard portrays is a little jarring at first. Adlard also relies heavily on shadows which Moore does not so that makes for another odd contrast.

Both artists are still great though and do a nice job. Moore draws superb zombies and Adlard is excellent at capturing emotion. While their styles may clash, both artists draw an amazing story and bring the stories to life in a nice fashion.

If I had one artistic complaint it would be that Adlard does have some rough patches here and there.  There are moments where I feel that Adlard's art was not quite finished before being inked or maybe the inking was too thin.


I have fallen in love with The Walking Dead. The characters and the story.  I am in deep and I do not want out. I will be picking up the rest of the hardcovers in the near future and, hopefully, I will get to review them all for you, perhaps next Halloween. If you want to get into what is one of the best survival horror stories ever then I highly recommend The Walking Dead. It will bite you and the infection will spread with every page that you read.
Posted by John "Zanziber" Rogers at 6:07 AM
Email ThisBlogThis!Share to TwitterShare to FacebookShare to Pinterest
Labels: Reviews