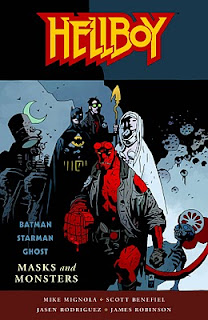 ISBN: 9781595825674
Price: $17.99
Publisher/Year: Dark Horse, 2010
Artist: Scott Benefiel, Jasen Rodriguez
Writer: Mike Mignola, James Robinson
Collects: Batman/Hellboy/Starman #1-2, Ghost/Hellboy #1-2
Rating: 3/5
When I was collecting ‘Ghost’, back in the mid-nineties, one of the things that always bugged me was the fact that I hadn’t got to the table quite quickly enough to be there right from the beginning. The storyline was more than enough to keep me going but I always wished that I’d had more of it than those little hints you get at the bottom of the page (you know the ones... ‘as seen in issue 28’, ‘you’d know all about this if you read issue 2’ and so on). That being the case, I absolutely jumped on the ‘Ghost/Hellboy’ two part mini-series when it came out in 1996 as a way of finally getting a whole story to read. It also helped that I was finally getting a chance to see what Hellboy himself was all about; I’d heard a lot about the character but never read any of his stuff.

I enjoyed the story but the ‘Great Comic Book Purge’ (a sad time...) pretty much consigned it to what eventually became a dim and distant memory; a memory so dim and distant in fact that when. I’ve heard great things about the character but have still barely scratched the surface of what he’s all about.

‘Masks and Monsters’ collects two Hellboy ‘team-up’ stories. In the first, Nazis and Elder Gods are fought in the steamy jungles of South America by an almighty line-up consisting of none other than Hellboy, Batman and Starman. In the second, Hellboy heads off to the city of Arcadia in search of a rumoured spectral vigilante. The city’s secrets run deep beneath its streets though and what he is about to find is far more dangerous than any ghost.

For the relative newcomer (like me), ‘Masks and Monsters’ is a great place to step on board and find out what Hellboy is all about. You may not get to find out as much as you want, more on that in a bit, but all that leaves you with is the urge to go and start reading! You might well be seeing a lot more ‘Hellboy’ on the blog in the near future.

The bottom line is simple. Hellboy hates Nazis and isn’t too fond of Elder Gods (and associated other supernatural threats) either. His work with the Bureau for Paranormal Research and Defence involves rooting these threats out and making sure that they are no longer a threat; all of this is done with a large stone fist and a wry attitude, a mixture that makes for an exciting and sometimes humorous read. It’s certainly enough to have me looking for more.

The stories themselves are immediately engaging but suffer from the format that they were originally released in. With all the will in the world, there’s only so much story that anyone can fit into a two part mini-series and the stories here are a fine example of this. There’s plenty going on but time constraints mean that it all feels a little rushed with no time for side plots, of any substance, that would flesh things out, particularly in the first story.

The Hellboy/Batman/Starman team-up is a riotous explosion of Nazi mayhem that is fun but feels like it’s had a whole kitchen sink full of stuff thrown at it to see what sticks in the time available for the story. Full of spectacle but not an awful lot else. I was also left wondering if you could really include Batman in the team-up as he barely features in the story. It is fun though and Mike Mignola’s distinctive artwork is as much a joy to get lost in as it ever is.

For my money, the Hellboy/Ghost story is a lot better although I would probably say that (being a fan of ‘Ghost’). While there are still the same issues with space for the story to breathe, what you have here is a story that makes up for this by taking a little more time to focus on the characters themselves and their interactions. Something very interesting starts to form here and it’s a shame that Ghost’s own storyline took her away from the opportunity to develop things further. The sense of Arcadia’s bloody history is also given good exposure and ties past and present together nicely to give us a story that does the best job it can in the space that it has. Scott Benefiel’s artwork was always going to come off second best against Mignola’s (for me anyway) but captures the essence of the tale almost perfectly.

‘Masks and Monsters’ was a little on the rushed side but you can’t really blame the book itself for that, it’s more the fault of a format decision (for the comics) that was made years ago. Not only was ‘Masks and Monsters’ a good place to get a feel for what ‘Hellboy’ is all about but it also fills in a gap for fans of ‘Ghost’; recommended reading if you fall into either of these categories.
Posted by John "Zanziber" Rogers at 6:00 AM
Email ThisBlogThis!Share to TwitterShare to FacebookShare to Pinterest
Labels: Reviews