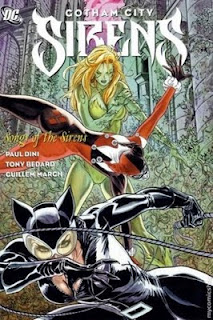 ISBN: 9781401229078
Price: $19.99
Publisher/Year: DC, 2010
Artist: Guillem March, Andres Guinaldo, Raul Fernandez, Peter Nguyen, Jack Purcell, Fabrizion Fiorentino, Ibraim Roberson, Marcos Marz, Luciana Del Negro
Writer: Paul Dini, Tony Bedard, Guillem March, Marc Andreyko
Collects: Catwoman #83, Gotham City Sirens #8-13
Rating: 3/5
I increasingly like the concept of Gotham City Sirens, even if the poses in which main artist Guillem March and others portray Catwoman, Harley Quinn, and Poison Ivy remain ridiculous; in as much as March draws Catwoman especially with her tunic unzipped well past her breasts, you'd think Selina would have gotten that zipper repaired by now. Still, writers Paul Dini and Tony Bedard presenting Songs of the Sirens as a buddy comedy works well, so much so that it's amazing to think these characters weren't intended as foils of one another in the first place.

Birds of Prey as written by Chuck Dixon was good, but the title now seems incomplete as compared to when Gail Simone took over and added the Huntress to the Oracle/Black Canary mix. There's not a one-to-one comparison to be made between the Birds and the Sirens, I don't think, but certainly the personalities in the two groups play off each other in similar ways -- Catwoman, our protagonist, is much like Black Canary in that Canary is often torn between Huntress's emotion and Oracle's reason; so too does Catwoman find conflicting aspects of herself in both Ivy and Harley.

This makes for fascinating reading, as when Catwoman and Ivy try to determine who's framed them for murder, or when Catwoman and Harley fight Catwoman's crazed sister. Add to this the fourth unofficial member of the Sirens, the Riddler, desperate for friendship and yet paralyzed in his mistrust of the Sirens. In the book's first chapters, Dini convincingly makes Gotham City's villain collective seem like a community, even without need for mention of the nemesis they all have in common. That the Gotham City Sirens and friends seem so natural together, despite more than fifty years in which these characters were not a team, says something for the strength of the concept.

Another unofficial Siren in this book is Commissioner Gordon, who teams with the Sirens and even by the end of the book knows where they live. Reflective of some of the disconnect between the various "Batman Reborn" books at this time, one might think Gotham City almost peaceful based on Gotham City Sirens, as opposed to the chaos found in Batman and Batman and Robin, as if all of Batman's rogues did actually go straight after Batman's death. Gordon comes off as quite the smart cop here, recognizing Ivy's innocence of a murder; his lack of concern about the villains make them seem rather soft, to an extent, but the alliance itself is interesting.

Yet this second volume Song of the Sirens is greater as a whole than as its individual parts. The Marc Andreyko story (after Bedard's Blackest Night crossover issue) is a great one-shot tale, focusing on Poison Ivy but with great moments for all the Sirens and for Commissioner Gordon. Dini also writes the two-part Sirens/Riddler team-up that's by far the star of the show, displaying both the Sirens friendship and their villainous nature. The next issue by Dini, bides its time in waiting for new writer Tony Bedard to arrive, with a joke more gross than funny stretched out over too many pages.

Bedard's issues, in which Catwoman battles her sister, are satisfactory in that they resurrect a plotline left hanging since Ed Brubaker's Catwoman series, but they don't rise to the level of Dini's early work here, nor do the guest artists match March's artistic style. Bedard very unnecessarily changes aspects of Catwoman's origin from Her Sister's Keeper when Brubaker brought those elements back. Poison Ivy is largely absent from Bedard's two chapters, and in all the book loses some of the verve that it had in the earlier chapters.

One other aspect I did like about this book, however, is the ways in which it fits into the ongoing Paul Dini Bat-universe. Songs picks up on a villain last seen in Dini's Heart of Hush from Detective Comics, and also has a cameo by the Broker, Dini's new character that's also appeared in Streets of Gotham. A quick look at solicitations doesn't reveal a greater role for the Broker any time soon, but I like how Dini keeps mentioning him, and how in both of Dini's titles, there's an underlying theme that all the conflict between heroes and villains circles back to Gotham City real estate, something both illuminating and absurd at the same time. I also appreciated Dini's quick nod to the Riddler's role in Batman: Life After Death; it's nothing essential, but I appreciated that it was there.

There's only one more issue by Bedard in the collection that will follow Gotham City Sirens: Songs of the Sirens, and then new writer Peter Calloway takes over. I'd just as soon have Paul Dini remain the writer of this series, but if that's not possible, I don't mind a new writer coming on. I can't say Gotham City Sirens is at the top of my pull list -- the tone's still a little too silly, and a book about Batman's villains will never be where the main story of the DC Universe is "at" as compared to the main Batman titles -- but Sirens is cute and charming here, a far cry from my original concerns about the series.
Posted by John "Zanziber" Rogers at 6:00 AM
Email ThisBlogThis!Share to TwitterShare to FacebookShare to Pinterest
Labels: Reviews