Cable and the New Mutants 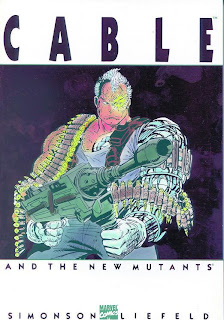 Title: Cable and the New Mutants
ISBN: 0871359375
Price: $16.95
Publisher/Year: Marvel, 1992
Artist: Rob Liefeld
Writer: Louise Simonson
Collects: New Mutants #86-94
Rating: 1/5
As the New Mutants head home from adventures in Asgard, Rusty and Skids are arrested by Freedom Force, and then kidnapped by the Mutant Liberation Front terrorist group. But there’s a new man on their trail – Cable! He joins the New Mutants as their new leader as they track the MLF and its mysterious leader, Stryfe.

I don’t even know where to begin with this, honestly. Liefeld’s art is just… I mean, it’s really bad. We all know his famous flaws – how he can’t draw feet; how characters appear oddly disconnected on the page; how everyone is either gritting their teeth or yelling, with no in-between; the cross-hatching and squiggly lines instead of backgrounds.

That’s all here, in spades, along with the occasional swipe. But on top of all that… the story-telling… it’s terrible. There’s just no flow from panel to panel. There were dozens of times I had to go back and read sequences to try and figure out what was happening – or what was supposed to be happening.

I’m not sure I can even blame all this on Liefeld, as the dialogue certainly isn’t any better, nor does it make anything clearer. I know the Marvel method puts pressure on writers to make bad art better through scripting, but Louise Simonson doesn’t seem up to the task… then again, maybe no one would be!

My favourite is a scene when Cannonball and Boom Boom are captured by Stryfe. One of Stryfe’s mutant assassins, The Dragoness, watches over them; they’re strung up, hanging with their hands in shackles, over their heads. For some reason, Dragoness flirts with Sam, kisses him, then leaves.

Boom Boom shares her disgust before inexplicably kissing Sam herself.

No, it doesn’t make any sense… and it only gets worse! Sam confesses he only flirted with Dragoness to get her close enough so he could filch the key to their shackles from “the pocket in her headdress.”

Now… ignoring how ludicrous it is that Dragoness would keep a key – actually, not even a key, but a swipecard – in her “headdress,” which is nothing more than a typical Liefeld mask with spikes… Sam’s hands are shackled. ABOVE HIS HEAD. In fact, when she kisses Sam, Dragoness, physically pulls his head forward, so his arms are now ABOVE and BEHIND him as well.

In other words, there is no physical way he could have taken the key. It’s impossible. His hands are nowhere near her, and he has no way to move them. Furthermore, even if he did, take a look at the last panel on pp 242 – Sam’s hand is now beside and in front of his face, with the keycard. What!? And how does a keycard unlock handcuffs, anyway??

The entire sequence makes no sense whatsoever. And yet it’s pretty typical for this volume.

(Oh, and by the way… in the entire sequence, only the opening panel has any semblance of a background. The other 10 panels either have a solid color or squiggly line background. Classic Liefeld.)

Anyway, let’s take a look at Cable, who’s the big draw here. Honestly, he’s a shell of a character, a pair of empty shoulder pads. Sure, you don’t want to reveal everything about a new character all at once. But I can’t imagine anyone accepting a complete stranger as their new leader as easily as the New Mutants do here. ESPECIALLY when one of them, Rictor, has some sort of past with him – something to do with the death of his father. I mean, here are a bunch of kids, who’ve been taught by Charles Xavier, by Magnets, by Scott Summer and X-Factor – in other words, the greatest mutants in the Marvel Universe – and all of a sudden they’re just gonna turn their backs and go with a guy they don’t even know?

Not only that, about 10 seconds after they join up with Cable, they’re bringing him into the X-Mansion sub-basements and letting him use Cerebro and the Danger Room! I realize the mansion isn’t being used by the X-Men, but still, ya think Professor X MIGHT just have a problem with them giving a total stranger – who, by the way, likes to carry guns and may have murdered Rictor’s dad – complete access to all of the X-Men’s secrets?

And the thing is… there’s never any indication given WHY they do this. Basically, the New Mutants stumble onto Cable fighting with Freedom Force and… that’s it. Just because they have a common enemy, this guy is suddenly suitable to be your new leader? Within minutes they’re calling him “sir” and following him like puppies. Why? What was wrong with X-Factor as mentors? The New Mutants jump ship and barely even bother to say goodbye!

Again, it makes no logical sense. It’s clear now, in hindsight, Liefeld had a cool (for 1990) character design – big guy with big shoulder pads, big guns, and a glowing eye – and Marvel let him bring the design into New Mutants and tried to find a way to make it work… apparently as quickly as possible.

Unless you’ve got a seriously incurable case of 90s nostalgia, I can’t recommend this, even if you can find it for $10 like I did. It’s just not an enjoyable read, and you’ll end up feeling ashamed of your younger self for liking the stories once upon a time.
Posted by John "Zanziber" Rogers at 6:00 AM
Email ThisBlogThis!Share to TwitterShare to FacebookShare to Pinterest
Labels: Reviews