Batman: The Return of Bruce Wayne 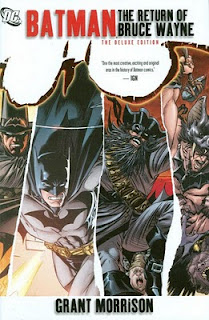 What we have here is some of the best aspects (or the most irritating, depending on your point of view) of Grant Morrison's latest mainstream DC Comics work. Return of Bruce Wayne is a story both modular and overlapping, like Seven Soldiers of Victory, and important events don't so much happen as take place quietly in the background. And, like Final Crisis. Return starts out straightforward and mundane, and ends in the extreme and the fantastical, fully comprehensible possibly only to Morrison himself.

One of my other concerns going in to Return of Bruce Wayne is that this book would serve as another step in Morrison's over-the-top deification of Bruce Wayne. I accept that Batman can single-handedly defeat the White Martians and that he's so prepared for any threat that he creates himself a backup personality in case his first was corrupted; I wasn't sure I needed to see Batman fight his way through time so everyone could praise him for that, too. Thankfully, even as there's some of that here (as when Batman builds for Booster Gold and friends the most intricate time machine ever created), Morrison tempers this with one small, startling revelation from Bruce Wayne -- from the moment Alfred tended to his first crime-fighting wounds, Batman has never been a solitary endeavor; Batman has never fought totally alone.

This admission, that Batman gets by with a little help from his friends, does wonders to humanize what's otherwise a wildly fantastical story. Yes, Batman managed to make his way through time and figure out the mystery behind it all in the process, but in each era he had help -- from the Caveman Robin known as "Boy" to Annie, pagan acolyte of the New Gods, and later from Jonah Hex and from the Justice League themselves. Batman states outright that he returns from the lonely end of time to the present, accompanied by a minion of Darkseid that's been stalking him, specifically so that the "Hyper-Adapter" will have to face the age of collected heroes; Return of Bruce Wayne (and the Batman, Inc. team book that follows it) is a renunciation of the idea of Batman as the grim loner, and an embracing of Batman as the team player that Morrison posits he's always been.

As Booster Gold and his team travel back to the present in the ultimate time machine, Rip Hunter remarks on how the end of time loops back through time's beginning, like a knot. Indeed, the reader ought to prepare themselves for some mental knots as well. In Return, we learn that Darkseid charged Batman's cowl with Omega energy and sent him back in time, such that the "Hyper-Adapter" can latch on and follow Bruce back to the future, destroying everything. Bruce leaves the cowl behind, essentially evading the trap, except that the meddling Red Robin and the Justice League find it and bring it in to play; Bruce then has to defeat the Hyper-Adapter, turning it in to the giant bat that helps jolt Bruce's memory in the first issue. That is, Darkseid sets a trap at the end of Final Crisis, and Batman uses that trap at the end of Return as the springboard to his own success at the beginning of that same book. The end here is the beginning is the end -- as I said, if you didn't like it in Final Crisis, you might not like it here, either.

Morrison's logic is not completely circular, however; Return is remarkably modular, much like Seven Soldiers was (the similarities don't end in the sameness of Frazier Irving's Klarion the Witch Boy and Return stories both by Morrison). Return can be read on its own, or part of a larger whole that includes Batman and Robin volumes two and three, and Batman: Time and the Batman; it can also be read to some extent both forward and backward (trust me, I tried it). As with Final Crisis, I interpret Return as another Morrison tribute to comics and storytelling, especially in the writer tackling the cowboy and pirate adventure genres; "Whatever they touch turns to myth," Batman narrates at one point, and he could just as easily be talking about the New Gods as Morrison could be about other writers, comics and continuity, as Return is built itself on Peter Milligan's Dark Knight, Dark City. Batman reminds himself of his own existence time and again in this story through the watchword "Gotcha"; it defines not only Batman but also the essence of serial storytelling, the cliffhanger, just as Morrison etched on Superman's tombstone "To be continued" in Final Crisis.

I liked Batman: The Return of Bruce Wayne -- more than I did at the beginning once I began looking farther past the surface, and even more than that when I read it the second time backward -- but Grant Morrison still doesn't quite have me convinced about this Bruce Wayne guy. Before Batman RIP, I didn't like the idea of an "imposter Batman," but Dick Grayson has grown into the role in such a short time, that I'm not enthusiastic about the return of the angsty, uber-capable Bruce Wayne. Return, as it turns out, is not so much about the re-emergence of the Batman Bruce Wayne as it is about Bruce Wayne's trip back. That's engaging, to be sure, but I'm curious to read about Batman's actual return on one of the other half-dozen modules of this story, to see how Morrison re-establishes Bruce Wayne after his being gone so long.
Posted by John "Zanziber" Rogers at 6:00 AM
Email ThisBlogThis!Share to TwitterShare to FacebookShare to Pinterest
Labels: Reviews