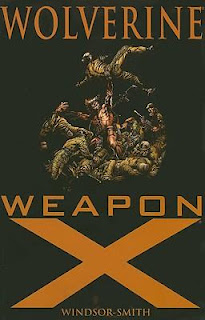 ISBN: 9780785137269
Price: $16.99
Publisher/Year: Marvel, 2009
Artist: Barry Windsor-Smith
Writer: Barry Windsor-Smith
Collects: Marvel Comics Presents #72-84
Rating: 3/5
Having hopefully allowed themselves the opportunity to dive deeper into the comics over the past 15 years since, readers can see which stories made the cut and which were significantly changed along the way. One story that proved a major influence on the animated series and its successors was Barry Windsor-Smith's Weapon X. This 1991 story showed readers a firsthand glimpse of the terrible process that turned Logan the man into Weapon X the killer. The cartoon offered some small piece of this tale, but the real thing is far more violent, more disturbing, and more engrossing than any children's program could hope to offer.

At the time, Windsor-Smith was best known for his work on Marvel's long-running Conan comics. His experience with the X-Men was meager, and he must have seemed an odd choice to readers at the time to chronicle such a pivotal moment in Wolverine's life. However, it's precisely this outsider quality to Windsor-Smith's work that makes Weapon X standout even 18 years later.

Weapon X was originally serialized in the pages of Marvel Comics Presents, which at the time tended to feature one Wolverine tale and several back-up stories each issue. Appearing as 13 segments of roughly a dozen pages each, Weapon X followed Logan's story from his capture by Weapon X scientists to the adamantium bonding procedure to his inevitable escape. Along the way, Windsor-Smith offers a glimpse of the men and women who molded Wolverine into what he is today.

In his introduction to this trade, Larry Hama eloquently explains just what makes Weapon X so unique. Windsor-Smith was not interested in rehashing the same style of writing that has so dominated Wolverine comics over the years. Forget the standard Wolverine monologue – the script rarely delves into Wolverine's mind at all. Instead, the story reflects on the nature of the character and the duality of his man/beast persona through the eyes of the Weapon X scientists. We meet Dr. Cornelius, an ambitious but disgraced scientist who finds a second shot at glory in Weapon X. We meet Carol Hines, a chipper, innocent young woman who nonetheless subjects Wolverine to the harshest of experiments. And we meet the enigmatic Professor Thorton, who appears to be in charge but, in truth, answers to a higher master.

The writing in this story is often fractured, but not in a bad way. The entire experience borders on the surreal, as narrative captions and word balloons swirl across the page and sometimes battle each other for supremacy. And yet, Windsor-Smith rarely wastes words. You'll find no needless narration or exposition here. There are times when the circular flow of word balloons becomes a bit hard to follow, but nothing too serious.

And though the bonding procedure seemed a simple thing in the cartoon, the comics depict it as much more difficult and time-consuming. Wolverine is subjected to test after test as the scientists struggle to make sense of his physiology and determine how to first restrain and then harness their new weapon. Even after Wolverine breaks from captivity, the story continues along and reaches a few surprising twists before granting Logan his hard-won freedom.

Weapon X is easily the most thoughtful and well-crafted look at this portion of Wolverine's life. Even Logan's oppressors become sympathetic in their own way. It certainly doesn't provide all the answers about Wolverine's life. It would be another ten years before readers learned his true name. But in terms of a character study, there is none finer. And the script even offers a fair bit of leeway in allowing itself to link with other stories down the road. One almost wonders if Marvel wasn't planning the revelation that Wolverine had bone claws this far ahead of fatal Attractions. And in Thorton's many phone calls to his mysterious benefactor, it's easy to imagine he's talking to a character like Romulus or Sublime, both of whom didn't debut until this decade.

But as strong as the script may be, the real asset of Weapon X is the art and the way it syncs with the script. Windsor-Smith illustrated Weapon X as well as wrote it. In fact, he performed nearly every task down to some of the lettering. It's a labor of love, and it definitely shows. Page layouts are far more creative and engaging than many contemporary stories. The sheer amount of detail crammed into panels as Logan is hooked up to wires or a he cleaves flesh from bone is remarkable. And as the story dips further and further into the surreal, Windsor-Smith's work only becomes more visually stunning.

The current edition of Weapon X offers a bit more in the way of bonus content than readers might expect from a standard trade paperback. In addition to a cover gallery, Marvel included a short segment from Wolverine Vol. 2 #166 illustrated by Windsor-Smith. Unfortunately, this segment doesn't impress much taken out of context, but it is an interesting showcase of how Windsor-Smith's art has evolved over the years.


For my money, Weapon X is the definitive Wolverine story. It offers up much of what readers love about the character – the violence, the mystery, and the inner turmoil. But it also dares to be different. Many of the classic Wolverine stories ultimately feel dated by modern standards. In terms of content, of visuals, and of impact, Weapon X remains as relevant today as it was in 1991.
Posted by John "Zanziber" Rogers at 6:00 AM
Email ThisBlogThis!Share to TwitterShare to FacebookShare to Pinterest
Labels: Reviews