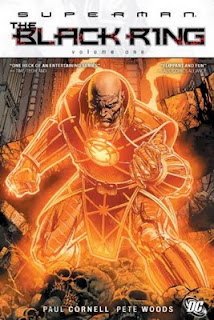 
At the beginning of The Black Ring, a disgruntled Lexcorp employee attacks Lex, and Lex has him killed. We've seen Lex do this kind of thing before, but never has he had a robotic Lois Lane lookalike, essentially the voice of the reader, to ask him exactly what he's doing. Lex is a sharp businessman with an intellect that can stand up to Superman, and yet his actions are completely outrageous -- firing an employee because he disagreed, and then killing him for the attacking. "Stop for a second," Robo-Lois cautions. "Think about what you just did ... Sure he attacked you because you fired him. But why did you fire him?" Lex is unable to give her an answer.

Cornell demonstrates a contradiction in Lex Luthor's character here that I don't think's been presented quite this way before. Lex is eminently powerful, so much that he hardly needs worry what the common man thinks of him, and yet he's so obsessed with a minor employee -- not that the man hit him, but that he disagreed with him -- that he has to have the man killed. Common perception would have it that Lex is a focused schemer, but Cornell underlines that Lex's actions, time and again and under numerous writers, suggest the opposite. Rather there's an element of Lex Luthor that's almost childlike or animalistic, slave to his instincts and with no filter or sense of large versus small injury. He cannot tolerate the slightest impediment to his own focused intentions, else he erupts in tantrums that often cost lives; to an extent, Cornell suggests Lex Luthor is just as unpredictable as the Joker, only in a more expensive suit.

And that much you can get just from the first five pages of this wholly intriguing book.

The story puts an even finer point on it when Lex ventures into the wilderness against Gorilla Grodd. Lex's plan to steal potential Black Ring power from Grodd involves Lex and his assistant Spalding disguising themselves as apes, sacrificing robot doubles of themselves in the process. It's clear here that Lex's animal nature must win out against the trappings of his money or intellect. Robo-Lois watches Spalding discard the robots with silent concern; Cornell establishes that Lois knows she's a robot, but feels a longing for the humanity that Lex represents. If we venture that everything Lex does is a metaphor for Superman, then perhaps the emotions Lois envies in Lex are like the powers Lex envies in Superman -- something each can only watch from a distance and strive for, but never achieve.

Earlier, Mr. Mind traps Lex within his own head, subjecting him to fantasies that reveal Lex's different facets. We see Lex as Prometheus, the only man brave enough to steal fire from the gods; then he's Dr. Frankenstein, and the modern-day Promethean monster that he creates is himself. In a western scenario, Lex battles the alien stranger who's come to town, Superman; last, Lex becomes Superman himself to save Metropolis from a giant Mr. Mind. There are equal parts determination and self-loathing here -- Lex believes in himself but is also horrified by himself; he wants to save Metropolis from their superheroic invader but really he wants to be that hero himself.

Lex emerges from the fantasies having to face still more contradictions -- he only trusts himself, he knows, but can't escape his overarching need for public support and acclaim. Lex Luthor can't ever, ever be happy; even faced with the promise of never-ending heaven, of bliss, from Death of Sandman fame, Lex admits he'd always be looking for a catch. "Send me where you're going to send me," he tells Death. " I'll find something to do. I'll find something to win. Even when I'm dead."

All of this examination of Lex Luthor, ultimately, is in service of a mystery. Death, Mr. Mind and his secret employer, even Vandal Savage all seek to understand Lex's weaknesses, for some reason we don't yet know. There's a wonderful sense of displacement that pervades this book, like a good Hitchcock movie; it starts sometime after Blackest Night, and we never see Lex's impetus for building the Lois robot -- or if he even built the Lois robot at all. There's any number of jumping off points for the entire story to be a dream or some trick on Lex, from when he's hit in the head to when he connects himself to his Isopod super-computer, through all of Mr. Mind's fantasies and Lex's near-Death experience. Robo-Lois, the book tells us from the beginning, is built from Brainiac's technology, and this fact alone imbues the story with rich paranoia -- anyone, whether Robo-Lois or Spalding or even Lex's power suit, could be Brainiac; the reader trusts no one and can never quite believe everything they read.

I previously expressed some dismay that DC Comics breaks The Black Ring up into two volumes. This is no fault of Cornell's, but it flattens the end of an otherwise interesting story. DC no doubt ends Black Ring after the sixth chapter precisely because the next issue begins the crossover with Gail Simone's Secret Six, but the end of the story comes very suddenly. I dare say it even seems like Cornell marks time a bit in the final chapter before the crossover; the issue focuses on Vandal Savage and his eons-long wait for Lex Luthor to fulfill a rumored prophecy. This is entertaining -- including the two pages where Cornell re-writes Savage/Luthor team-ups to fit this story -- but overall it would probably read better with the second volume alongside; here it seems Lex disappears from the forward action of the book a bunch of pages before the end.

The Black Ring is not the picaresque tour of DC Universe villainy that it pretends to be; it's more. I was struck however that this volume, which features a DC Comics villain and which has a murder in its first issue, works so well when the Titans: Villains for Hire I read recently includes much the same thing and goes awry. I'd like to think the difference is a little deeper than just that Cornell's Lex kills an anonymous employee and Eric Wallace's Deathstroke kills the Atom Ryan Choi; moreover, I think the Black Ring reader is helped considerably by the first page where Lex teases the villains who've kidnapped him. Lex is a charmer, and Cornell makes him charming, and I believe the reader will follow charm even when the protagonist does bad things; Deathstroke's murder of the Atom is forthright, unpitying, and bloody, and I don't think it gives the reader any opportunity to like Deathstroke before it happens. Second, I think we can't overestimate the importance of Robo-Lois in this book, calling Lex to task on his villainy. The other Titans express discomfort with the murder of the Atom, but Wallace's Tattooed Man, for instance, is not as forthright as Cornell's Lois is in just a single pag. I wondered after reading Titans -- still with me, obviously -- whether the current era of the villain comics began and ended with Secret Six; Cornell shows that that's not the case, and it's the way the story's built that's perhaps the mitigating factor.

I never got into Doctor Who (my dark geek secret; no idea where to start, really), and I never read any of Paul Cornell's Marvel work, so he's arrived to my attention a bit out of nowhere -- and then proceeded to take the reigns of one of DC's highest profile book, wrote a Secret Six crossover, and got permission to use Neil Gaiman's Death, for gosh sake; would his writing, I wondered, live up to the hype? The answer is that it does. Reading Superman: The Black Ring is like going down the rabbit hole, with every page curiouser and curiouser; I have high hopes that the answers provided in volume two match the superlative build-up they're given here.
Posted by John "Zanziber" Rogers at 6:00 AM
Email ThisBlogThis!Share to TwitterShare to FacebookShare to Pinterest
Labels: Reviews