Another year and another trip to Seattle, Washington for the annual Emerald City ComiCon. This year, I'm planning on doing quite a bite more than I have in years past, as the panels that are scheduled for this con are very exciting to me.

When we first arrived, getting my badge was a whole lot simpler than in previous years. The volunteer was able to scan my ticket and quickly give me my pass and swag bag. I was on my way. This was also the first year I have been able to make it to the opening of the con.

There I was, standing outside of the exhibit hall, part of a mass of humanity the size of which was just astounding. The con volunteers kept asking us to press forward, as if we would somehow begin to become a mass organism rather than individuals. As impatient as I am, there was many time checks between 1pm and the doors opening at around 2pm.

Once the gates of the con were opened, the unwashed masses began to pile into the hall. There were few options as to where to go as the sea of humanity flowed in certain directions. As the returning salmon do every year, so to did I brave the currents of event goers to get to my first destination; the Avatar Press area.

I've been a huge fan of Lady Death for much of my adult life. There was a time where I had a large collection of high grade variants, all signed by creator/writer Brian Pulido. I even had a Gem/Mint condition issue. Sadly, as dark economic times hit, the need for the almighty dollar to survive outweighed the need for having pretty, signed and graded comics. Now that I am in a more stable economic situation, I intend of getting some of that former glory back with the new releases of Lady Death... and Avatar Press just happened to have some ECCC exclusives.

I was able to acquire my set, but it wasn't until I got back to my room later in the day to organize my findings that I realized my set wasn't quite complete. The description on the Avatar Press website says "Complete set of Friday, Saturday, Sunday LD #15, plus the Easter Bunny cover and the VIP cover. Ltd to 250 sets." I received all the covers except for Friday's, but received 2 of the VIP cover. The completest in me is a little upset, but they are now sold out and there's nothing I can do about it.

After my first accomplishment, I walked around for the next hour, getting the lay of the land. I came back later for autographs from Ben Templesmith (nice guy, who also wished that Tom Feister would have been there... a later story.), Bill Willingham (incredibly funny man, and a story to be related later as well.) and the first wave of items to be signed by Brian Pulido. These last items come in the form of some action figures that were released at the height of Lady Death's original run of popularity in the mid 90's.
This year, the ECCC exclusives were amazing. Since my birthday last year, my sister has gotten me hooked on Fuko! bobbleheads. First it was Batman and Robin, but at Christmas, she presented me with the entire collection of Star Wars... including the San Diego ComiCon exclusive. When I hear that ECCC was going to have an exclusive pair of these figures, I couldn't pass up the opportunity. 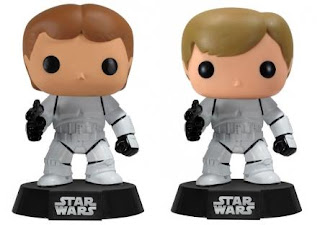 Saturday will provide another day of fun and excitement. I'm planning on taking in a few panels, getting some more autographs, and maybe even finding some missing issues to fill the holes in my collection. More later.

Posted by John "Zanziber" Rogers at 6:48 AM
Email ThisBlogThis!Share to TwitterShare to FacebookShare to Pinterest
Labels: Emerald City ComiCon, Opinion