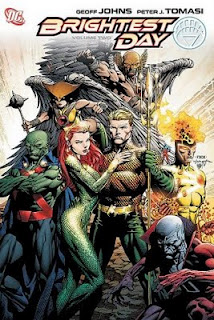 ISBN: 9781401230838
Price: $29.99
Publisher/Year: DC, 2011
Artist: Ivan Reis, Patrick Gleason, Fernando Pasarin, Ardian Syaf, Scott Clark, Joe Prado
Writer: Geoff Johns, Peter Tomasi
Collects: Brightest Day #8-16
Rating: 3/5
The second volume of Brightest Day contains three origin stories -- exercises in retroactive continuity, for the most part. In its details, this is a book mired deep in the continuity of the DC Comics Universe -- too deep, perhaps, deep enough to even set an educated fan like myself's head spinning. In its broad strokes, however, I continue to enjoy Brightest Day very much; there are fan-favorite characters here experiencing the kind of rebirth that writer Geoff Johns (with Peter Tomasi) is known for. And this second volume ends on a number of cliffhangers leading into the third book, making the wait for the final chapters all the harder.

Add to all this that Brightest Day -- though I've not heard anyone say so directly -- seems to me an intentional lead-in to a number of the new DC Reboot series, and that makes Brightest Day one of the most compelling titles I'm reading right now.

Two villains and a hero -- the Martian D'kay D'razz, Hawkworld's Queen Shrike, and the new Aqualad -- all receive origins in this volume, and all are relatively confusing. D'razz's involves an unlikely Martian-transport accident before Martian Manhunter's self-same accident, and then the writers tie D'razz's current mayhem to both Manhunter's death in Final Crisis and resurrection in Brightest Day, instead of just the latter event. Aqualad's "couple adopt an orphaned baby" beginnings is too much (though perhaps intentionally) like Superman's, and his ties to Aquaman's wife Mera's own "secret" past are too much tied in obscure Aquaman stories that haven't themselves been revisited in years while the character's been in limbo.

Worst, however, is Hawkgirl Shiera Hall's mother Queen Khera emerging as Brightest Day's limbo-Hawkworld's Queen Shrike. Hall herself hasn't appeared in a comic for ten years or longer, and Shrike isn't apparently Hall's mother proper, but rather the mother of Hall's ancestor-by-reincarnation, the Egyptian Princess Chay-Ara. How Hall immediately recognizes her, and the overcomplicated two-page spread that details a series of murders and suicides that lead to Shrike becoming a pharaoh and then queen of Hawkworld, become less important than the reader's basic understanding that this person is "good" and that person is "bad." I give Johns and Tomasi points for not glossing over the minutia Mera and Hall's individual origins just because we haven't seen them in a while -- at the same time, the book's momentum comes to halt with these double-page origins, filled with details that I can't imagine will factor all that heavily later.

This is the exception, however, because otherwise the various plotlines of Brightest Day move rather swiftly. Johns and Tomasi's Aquaman, with Ivan Reis's art, is as self-sure and commanding as he should be, and the writers even make his telepathic powers look cool as he touches his fingers to his forehead at the end of the book; I also root for this Aqualad mainly because of how much I like his counterpart in the Young Justice cartoon. The Hawkman/Hawkworld story, despite the complicated villain, is nicely violent (too violent, some might argue, but I've come to believe that Hawkman stories lend themselves to a certain amount of bloodshed). The Deadman/Dove thread gets some life (and some neat guest stars) once the curmudgeonly Hawk drops out of the picture; the Martian Manhunter delves too long into obvious fantasy sequences, but I find Manhunter's conflict with D'razz very compelling -- on one hand, she's the last female of his species, and on the other, she's a mass murderer.

Still best, as was the case in Brightest Day volume one, is Johns and Tomasi's take on Firestorm. Again, as is Johns's wont, the writers offer a new take on the character's old paradigm -- now, Firestorm's two halves must remain in peaceful emotional sync or else destroy the universe-- a hard task under regular superheroic circumstances and even tougher when one side played a role in killing the other's girlfriend. Firestorm is an established hero, but this revised approach makes everything that was old now new (and young) again. It's hard not to see the similarities between where this is going for Firestorm and the descriptions of Gail Simone's new Firestorm series; we don't know if Firestorm is a relaunch a la Batman or a reboot a la Superman, but the former increasingly seems more likely the case, and that the events of Brightest Day will still have an impact going forward.

Indeed, given titles for Aquaman, Firestorm, Hawk and Dove, Deadman (in DC Universe Presents) Resurrection Man (who cameos here) and certain others -- and the similarities, at least, between Firestorm here and the upcoming Firestorm series -- Brightest Day seems more and more like a "backdoor pilot" for the DC Relaunch, and it's surprising more hasn't been made of that. Given that we wait-for-traders will be sobbing quietly at midnight on August 31, waiting for the DC Relaunch to visit us in collected form sometime in May 2012 (oh, the humanity!), you'd think DC would do well to point out that if fans want their first taste of the DC Relaunch, they might very well find it in Brightest Day.


Over the last four chapters of Brightest Day volume two, Johns and Tomasi leave every character with some kind of cliffhanger, and even despite knowing how some of volume three will shake out, the suspense is exciting. As a semimonthly series (which we'll lump in with DC's previous weeklies), I can't say Brightest Day is "better" than 52 solely because of 52's scope and ambition, but Brightest Day is a good story, and shows weeklies can work after the relative disappointments of Countdown to Final Crisis and Trinity. Being semimonthly perhaps helps Brightest Day substantially; the title is focused, action-packed, and rarely slow (Martian Manhunter dream sequences notwithstanding). I'll say again -- Brightest Day is one of the better titles I'm reading right now.
Posted by John "Zanziber" Rogers at 6:00 AM
Email ThisBlogThis!Share to TwitterShare to FacebookShare to Pinterest
Labels: Reviews