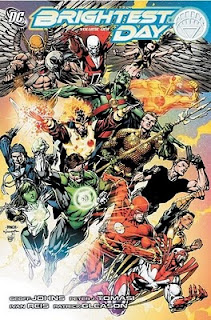 ISBN: 9781401229665
Price: $29.99
Publisher/Year: DC, 2010
Artist: Ivan Reis, Patrick Gleason, Fernando Pasarin, Ardian Syaf, Scott Clark, Joe Prado
Writer: Geoff Johns, Peter Tomasi
Collects: Brightest Day #0-7
Rating: 3/5
After the twin disappointments that were DC Comics last two weekly series, Countdown to Final Crisis and Trinity, I felt considerably wary about DC's newest every-other-week foray, Brightest Day. I am pleased to report, however, that the combination of two of DC's premiere writers -- Geoff Johns and Peter Tomasi -- and a story tied but not-too-tied to the ongoing DC Universe, are exactly the recipe for a winning miniseries, one that I'd be willing to say evokes -- and even in some areas surpasses -- that gold ring of all weekly series, 52.

The first chapter of Brightest Day volume 1 name-checks all twelve characters resurrected at the end of Blackest Night, but mainly focuses on the Martian Manhunter, Aquaman, Firestorm, Hawkman and Hawkgirl, and Hawk and Dove, whose plot intersects by the end with that of the book's narrator, Deadman. Already in the first book, Brightest Day overcomes a number of the shortcomings of previous weekly series: all of the stories appear to move forward each issue, such that no character seems forgotten; and there is enough forward action -- Hawk and Dove meeting Deadman, Deadman encountering the Anti-Monitor, for gosh sakes! -- to make this series more than just a extended trailer for DC's other monthly titles.

I read some criticism online when Brightest Day began about excessive violence in the title. Personally, after the horror-fest that was Blackest Night, I found the first volume of Brightest Day rather tame. Yes, a White Martian kills an entire family, including the kids, and yes, Black Manta stabs to death all the customers at a fish counter, but I maintain none of it was as gory as when a Black Lantern tortured Firestorm's girlfriend to death. Maybe sliding scales of violence are a bad thing, but one person's opinion is that Brightest Day's violence didn't strike me as being greater than your average issue of Batman.

Speaking of Firestorm, I found the Jason Rusch/Ronnie Raymond plotline the most compelling of this book, perhaps because it's the most new to me (both Hawman and Hawgirl, and Hawk and Dove, picking up mostly where they left off). My experience with Ronnie Raymond is admittedly limited to Super Friends, to start, and then in Extreme Justice, neither being perhaps the most faithful incarnation of the character. In Extreme Justice, Dan Vado portrayed Ronnie as an alcoholic; given Firestorm's sunny presentation in Super Friends, I thought this was Vado taking some licenses (unnecessary, perhaps) with Ronnie's character.

Johns and Tomasi, however, preserve Ronnie's hard-partying, bad-boy image, something I still find implausable but at least consistent with what came before. The idea of two personalities merged in the Firestorm matrix hating one another the way Jason hates Ronnie is an interesting one; I imagine Jason won't ultimately hate Ronnie for too long, but for now it's a Firestorm dynamic I haven't seen before. I liked the relevation that Ronnie remembers killing Jason's girlfriend Gehenna despite claiming otherwise, and I'm curious to see how that story unfolds.

As is often their wont, Johns and Tomasi engage in a bit of retroactive continuity in these pages. I don't mind so much the revelation that Professor Erdel, who brought the Martian Manhunter to Earth, had a daughter present who will affect the Manhunter in some way (though I'm confused whether the merged green Martian and the White Martian are one and the same or not), but I was disappointed by Aquaman's wife Mera's claims that all we've known about her so far is a lie. Maybe the former is easier to take because it's just a tweak to the Manhunter's origins, which has withstood tweaks before; but I'm not familiar enough with Mera's origins to know what's right and wrong any more, when it seems like the majority of what came before is now invalid. Too confusing for my tastes.

There's a scene in the beginning of Brightest Day volume 1 where Green Lantern Hal Jordan, Sinestro, and Star Sapphire Carol Ferris drop by; the Flash Barry Allen cameos a few times, and Martian Manhunter teams with Oracle, Superboy, and Miss Martian, among others. All of these appearances give a life to this series, the kind 52 had also, except Brightest Day has the added benefit of taking place in the present. This is standard superhero fare, to be sure, and does not distinguish itself with 52's sense of real time or Final Crisis's smarts, but one feels in reading it that this is where the DC Universe lives.

Even after Brightest Day ends, it would be easy to convince me that DC needs this kind of anthology book, where anyone could show up and anything could happen, and you really get a sense of the "universe" in the DCU. I was pleasantly surprised by this book, and I'm in for the next volume.
Posted by John "Zanziber" Rogers at 6:00 AM
Email ThisBlogThis!Share to TwitterShare to FacebookShare to Pinterest
Labels: Reviews