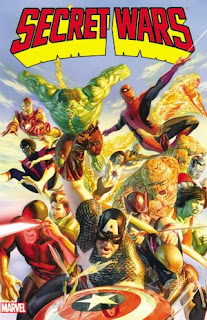 Title: Secret Wars
ISBN: 9780785158684
Price: $34.99
Publisher/Year: Marvel, 2011
Artist: Mike Zeck, Bob Layton
Writer: Jim Shooter
Collects: Marvel Super Heroes: Secret Wars #1-12
Rating: 3/5
1984 was an interesting year for me. This was the year that I was first introduced to the role playing game, Dungeons & Dragons. This was also the year that I began reading and collecting comic books. I remember my parent’s gifted me with a subscription to G.I. Joe: A Real American Hero and The Amazing Spider-Man. There was only a single comic store in my city and I only ever was able to visit around the 4th of July when my Dad would take me there to pick-up some more Star Wars trading cards.
This was also the year of the first huge company crossover storyline from Marvel; Secret Wars. This was so huge, and some of the ramifications from it are still apparent in today’s stories.
Classic heroes and villains are brought to Battleworld to help the entity known as the Beyonder understand human desire. I’m not exactly sure that the Beyonder got what he was looking for, but this is a good read none the less.
On the side of the heroes you have the Avengers, Hulk, 3 of the Fantastic Four, Spider-Man, the X-Men and… for some reason… Magneto. On the villain side you have Doctor Octopus, the Lizard, Molecule Man, Kang, Doctor Doom, the Enchantress, the Wrecking Crew and Galactus.
This is your classic "Good vs. Evil" story. The heroes, generally, seem to work well together. There's some friction towards the X-Men, but it get's worked out in the end. The villains don't work well together until there is a clearly defined leader... and that leader is Doom. His eyes are on more than the prize the is offered, and he will not let anyone stand in his way.
You can defienetly tell that this was written and penciled in the 80's as the dialog is a bit campy at times and the art isn't as crisp as what you would find on the shelves now. It is still a good trade and one that every collector should have in their collection.
Posted by John "Zanziber" Rogers at 6:00 AM
Email ThisBlogThis!Share to TwitterShare to FacebookShare to Pinterest
Labels: Reviews