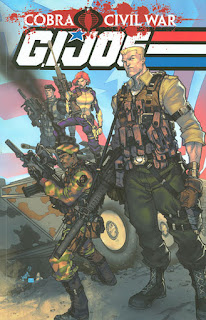 Cobra has gone to Hell, and the Joes need to figure out what’s going on. It also doesn’t help that they still don’t know that much about the entire organization that is Cobra. Within Cobra, we know that Cobra Commander is dead, and there are a select few that are “auditioning” as his replacement.

In this trade, we see the “civil war” primarily from the outside perspective of the Joes. They seem to be reacting rather than anticipating, and that has the entire team thrown out of whack. What happens when the Pit is compromised by Cobra agents? Who thought that would even be possible?

The art is well done and is a compliment to Chuck Dixon’s script. I look forward to seeing more work from this team in further volumes. Dixon understands G.I. Joe, and that’s why he one of the best writers on the IDW payroll and best suited on his duties.

If you aren’t reading this series from IDW, you should be. When they took over a few years back, they made this brand better than the way Marvel had left it. The only G.I. Joe title that I’ve been disappointed in from IDW has been the adaptation of the movie. Everything else, get it… read it… add it to your collection. Due to their work on the various G.I. Joe titles, IDW comprises the majority of the titles I subscribe to.
Posted by John "Zanziber" Rogers at 6:00 AM
Email ThisBlogThis!Share to TwitterShare to FacebookShare to Pinterest
Labels: Reviews