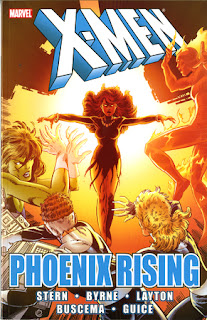 The significance of the story has been dulled somewhat by time. With Jean Grey alive and well a decade and a half later (well, okay, I guess she died again after I first posted this review), her "death" and resurrection seems a minor footnote in her history, and with X-Factor no longer comprised of the original X-Men, this origin tale will have little resonance for later fans. For X-Men completists, though, the story bridges some of the gap between the classic Dark Phoenix Saga and modern stories. And for nostalgists, this provides a nice window on its time period, with a Stern/Buscema Avengers, and John Byrne's work on the Fantastic Four.

As a standalone, read it for the story, Phoenix Rising is O.K. Not bad, not a must read, either.

It begins with the Avengers investigating an underwater disturbance in New York's Jamaica Bay. As written by Stern, and nicely illustrated by John Buscema (with Palmer on inks) it's an enjoyable tale, with the character interplay (mainly Wasp, Black Knight, Sub-Mariner, Captain Marvel II, Hercules and Captain America) taking priority over action; but there's enough mood and suspense generated by the Avengers' investigation to make it a page turner. There's a sedate approach taken that is oddly appealing, which I also noticed in another run of Stern/Buscema stories in Avengers Under Siege.

The Fantastic Four story (at a time when She-Hulk had temporarily replaced the Thing) picks up where the Avengers leave off. Jean Grey is resurrected and we are given the obligatory re-imagining of key X-Men history, explaining how everything we knew about her transformation into Phoenix and eventual death wasn't what we believed. This is the most significant, mythos-wise, of these issues. But it's also, perhaps, the weakest. I wasn't as big a fan of John Byrne's tenure on The Fantastic Four as many others are, so that plays into my ambivalence. I didn't entirely warm to his take on the characters, or his plotting in general. Here, the story isn't an adventure, per se, yet neither does he fill up time with ongoing character stuff (as Stern did in his Avengers issue) -- in fact, She-Hulk and the Human Torch appear only briefly. That makes for a piece that, though O.K., is a bit...dry. Even the dramatically powerful emotional stuff Jean Grey must deal with is muted because this is, after all, and FF story, so it's told more from their perspective than from hers.

Surprisingly, the strongest tale is the double-length X-Factor issue. I say surprisingly because I had read it when it was first published years ago (unlike the other two issues which I got recently)...and I had never bothered re-reading it in the ensuing years. I really didn't like it. That was partly because I was incensed at the decision to bring back Jean Grey. After all, the Dark Phoenix saga was such a milestone in comics history, how could they so cavalierly cheapen and negate it by bringing back Jean Grey -- particularly in the manner they did? As time went by, and Jean's return was a fact, I mellowed somewhat, and realized the question could also be turned around and asked, what right did Chris Claremont (and artist Byrne) have to kill her off in the first place? If they had the right to kill off a character others had created, didn't someone else have a right to bring her back? As well, at the time I wasn't impressed with Guice's workmanlike art, or other things. And maybe the fact that I just wasn't that familiar with the original X-Men meant the comic's basic appeal -- a reuniting of the old team -- was lost on me.

Whatever the reasons, re-read now, a decade and some later, I enjoyed it. Of the three issues reprinted here, it's the one that most becomes a story, showing how the original X-Men decide to form a new group, and their first adventure, while Cyclops struggles with his mixed feeling over his one-time love Jean Grey's return -- now that he's married and with a son. Like the other issues, this isn't chock full of action (though there is action) but it works well as a story, with nicely realized personalities. I enjoyed Guice's art now, appreciating the unsplashy, just-tell-the-story style in contrast to the garish cartooniness that is common today. Maybe it helps that I'm more familiar with the original team, and have developed an affection for them in the years between readings (thanks to TPB reprints).

What writer Bob Layton captures is the essence of the old team, and what distinguished them from most super hero groups: a sense that they're a family. The characters aren't as colorful as some, they don't bicker or butt heads so much, but there's an easy, believable camaraderie, here given extra depth by the fact that these are older, seasoned people. In fact, Layton maybe does a better job than John Byrne did when, years later, he tackled the original team in the X-Men: The Hidden Years series.

Of course, as noted, the X-Factor here bears little relationship to later incarnations. Most of the original X-Men drifted back to the parent comic over the years. And the ethically problematic concept -- the team exploiting mutant hating prejudice by pretending to be an anti-mutant organization -- was dropped early, apparently.

There's nothing here that makes Phoenix Rising a must read (just as a story, that is), but it's enjoyable enough, particularly when it indulges in its soap opera-y/character stuff. Heck, the X-Factor issue kind of makes me wish that comic was cheaper in the back issues bins, because I wouldn't mind sampling a few more issues. I’d suggest adding this to your collection if you are an X-Men fan..
Posted by John "Zanziber" Rogers at 6:00 AM
Email ThisBlogThis!Share to TwitterShare to FacebookShare to Pinterest
Labels: Reviews