The Walking Dead Board Game 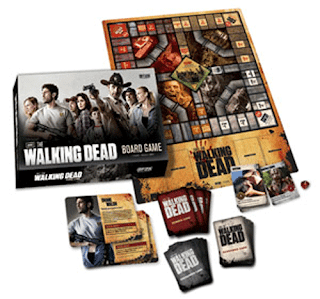 Title: The Walking Dead Board Game
Publisher: Cryptozoic Entertainment
Price: $39.99
Ages: 13+
Number of Players: 1 – 4
Playing Time: 30 – 45 minutes
Box Contents:
Rating: 4/5
As those of you who read my blog, I typically review trade paperbacks and graphic novels. This Christmas, I received a board game as a present from my parents, and had an opportunity to play it that very same evening with 2 of my friends. I was asked to please post a review by the owner of my local comic store, Tony's Kingdom of Comics, and I couldn't resist. Being a fan of both the trades and the television series, The Walking Dead Board Game interested me from the moment I saw it.

TWD is a board game where you roll-to-move around the zombie wasteland and try to capture four locations by moving and encountering different encounter cards. These cards, representing the zombies or other difficulties, usually challenge you to a die roll. You can modify this roll with scrounge cards which represent the helpful tools you find along the way. The game is played more competitively than cooperatively depending on the status quo; at first all 4 survivors are trying to survive and later there are two survivors against two zombies.

The game is indeed thematic and accurately depicts a struggle to survive with inadequate supplies. The game is also very simple to play. Picture the game as a monopoly board. You start at camp, which is in the middle of the board, and move outwards to the monopoly like track, starting at the railroad centers. From there you may move clockwise or counter clockwise depending on how high you roll. You want to get to all four corners of the board, as each corner gives you a special location tile. The tiles are:

+1 to your move
+1 to your attack roll
Draw 2 scrounge cards/Pick up the bottom scrounge card from discard
+1 Ally (health) or +2 allies if you have no other location tiles.

The last location which gives you the +2 allies if you have no other location tiles tends to be the first one you visit and was a no brainer. The game kinda emphasizes player proximity by either rewarding or punishing you for being in the same region as another player. I say kinda, because if it both punishes you and rewards you simply by chance, then there is no actual strategy involving player proximity, but at least it emphasizes it.

So you're moving to these location tiles, and along the way you'll reach encounters. You pull an encounter card and play as many scrounge cards as you wish to aid in your roll of a d6. Your scrounge card might be a gun that gives you a +2 to your roll against an encounter of zombies of 7. If you roll a 6, you critically succeed. If you pass...nothing happens. If you fail, you lose an ally token. If you're out of ally tokens...you're dead and you reanimate. Zombies get to draw their own zombie cards and either modify the difficulty or impose their own challenge on survivors.

If you're able to collect all 4 location cards and return back to the middle (Camp), then you win. If you reanimate as a Zombie and manage to kill off all the other survivors, then the zombies win. Fun either way. There's also a team play where one team is survivors who play against team zombies. Again, survivors retrieving all the locations and returning to camp before they die win the game. This game also includes rules for playing solo. Not something you often see in a board game, but I'm interested in giving it a try some day.

If you're a fan of TWD and you like playing board games, I suggest you pick this up and bring your friends over for the fun.
Posted by John "Zanziber" Rogers at 6:00 AM
Email ThisBlogThis!Share to TwitterShare to FacebookShare to Pinterest
Labels: Reviews