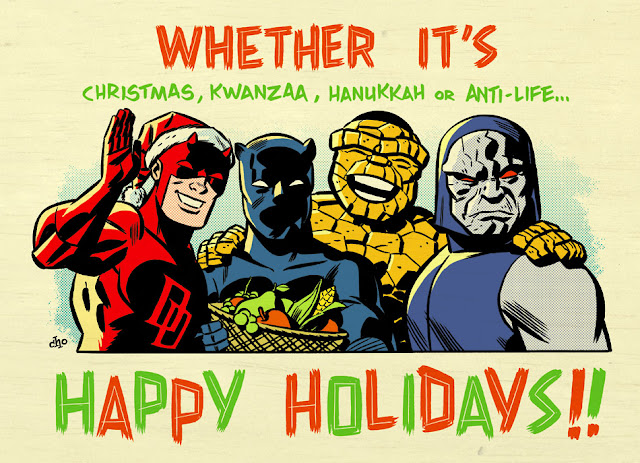 Posted by John "Zanziber" Rogers at 6:00 AM No comments:
Email ThisBlogThis!Share to TwitterShare to FacebookShare to Pinterest

As those of you who are frequent readers, you'll notice I haven't posted a review today like normal. I've been very busy and have had to prioritize my time. The good news is that I'll have a week off from work around Christmas time, and I'm planning on working on reviewing the large stack of trades I have next to my desk.

When I have new reviews posted, I will post them on my Facebook page, the Comic Collector Live message boards and Facebook group and (if I remember to post there) the Collectors Society message boards.

Thank you for your continued support, and Happy Holidays! Posted by John "Zanziber" Rogers at 7:53 AM No comments:
Email ThisBlogThis!Share to TwitterShare to FacebookShare to Pinterest 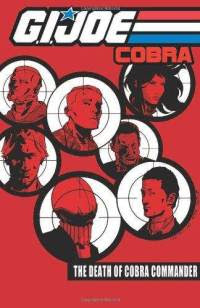 One event precipitated the Cobra civil war, and that is the death of Cobra Commander. This trade follows the events leading up to his untimely demise and the civil war. If you haven’t read the single issue of the G.I. Joe: Cobra title, you’re sure to be surprised with what happens.

This title has always revolved around a single Joe; Chuckles. He’s a Cobra prisoner, but soon becomes so much more. You also have a fine cast of Cobra characters to fill the empty spaces in this story: Tomax and Xamot, the Baroness, Big Boa and, of course, Cobra Commander himself. I enjoy the commander’s reasoning behind what he does. This differs greatly from what Larry Hama originally wrote during his days with Marvel, but it works very well.

The art sometimes leaves a lot to be desired, but it is fairly consistent with all 3 of the artists. The art is not entirely great but not the worst I’ve ever seen. The whole trade is well worth the price and I suggest adding this to the collection of any G.I. Joe fan.
Posted by John "Zanziber" Rogers at 6:00 AM No comments:
Email ThisBlogThis!Share to TwitterShare to FacebookShare to Pinterest
Labels: #ThrowbackThursdays, Reviews

What If?: Civil War 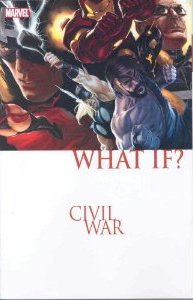 Title: What If?: Civil War

I love the What If? and Elseworld stories. Always have, and probably always will. In this particular trade, we tackle a few elements from the epic Civil War storyline where we saw superheroes versus superheroes and friend versus friend. This storyline changed the face of the Marvel Universe. These characters were no longer your father’s superheroes, they were a breed apart and they were standing up for what they believe in.

In this trade, we start with 2 stories about Civil War: What if Captain America led all the heroes against registration? –and– What if Iron Man lost the Civil War? These are well worth the price of the trade. It also helps that I read the Civil War trade prior to reading this one, so I understood what was going on within the actual continuity.

From there, we have a Planet Hulk based section of stories: What if the Hulk died and Caiera lived? –plus– Peaceful Planet –and– What if Bruce Banner had landed on Sakaar instead of the Hulk? Having not been a big Hulk fan, nor reading any of the build-up before Civil War, these stories held little interest for me. They’re not bad, just not interesting to me.

Then we have What if Annihilation reached Earth?, What if Vulcan gained the power of the Phoenix? and Spider-Man vs. Wolverine. These stories were very interesting, but I’m not sure why they were included in a trade geared for Civil War.

The art for this trade is well done, and the writing is fair. There are quite a number of names on both sides that I don’t recognize. I don’t think I would recommend to add this trade to your collection at full retail price, but if you can get it at a decent price, it’s well worth the read… for the most part.
Posted by John "Zanziber" Rogers at 6:00 AM No comments:
Email ThisBlogThis!Share to TwitterShare to FacebookShare to Pinterest
Labels: Reviews
Newer Posts Older Posts Home
Subscribe to: Posts (Atom)