World Without A Superman 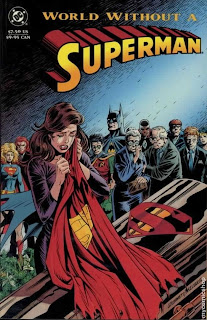 Title: World Without A Superman

I remember when the Death of Superman made the all the news programs. It was probably the first time that a major character actually died in print. I also remember getting a copy of Superman #75 as a Christmas present from my parent’s that year. This trade offers the Funeral for a Friend storyline that happened after his death.

Everyone is saddened by the passing of Superman, and everyone comes out of the woodwork to mourn and memorialize his passing. But not everyone is there to pay homage to the fallen superhero. Some people have made plans to use Superman’s body as the start to create a new race. (The term “super soldier” was never actually used, but it seems implied.)

My biggest problem with this trade comes from the fact that I never read any Superman title religiously, but I knew enough about the story that I understood several of the main chorus of characters. Because of this, I kept wondering what was up with the new look for Lex Luthor. I also couldn’t connect with any of the minor characters that played more pronounced roles in this particular trade. For my sake, I think that it could have been written better without the attention to these smaller characters and delve more into the storyline of how members of the Justice League were taking this loss.

Of course they left the ending very open so DC could start the Reign of the Supermen storylines. I understand that you can’t leave an icon like Superman truly dead for too long. He’s no Green Arrow; he’s one of the cornerstones of the entire comic world. A true World Without A Superman would be like having Bryan Singer direct every Superman movie… not worth seeing.
Posted by John "Zanziber" Rogers at 6:00 AM
Email ThisBlogThis!Share to TwitterShare to FacebookShare to Pinterest
Labels: Reviews