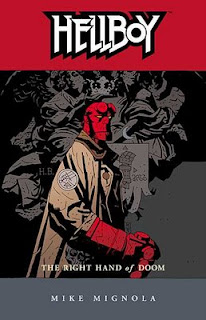 Officially listed as the "fourth" Hellboy TPB, the Right Hand of Doom (like the previous -- Chained Coffin) is an anthology of tales rather than a single, long form story. And though the fourth TPB, it collects stories published over a few years, in a variety of venues, some that might technically have been published inbetween stories from the earlier TPBs. As well, part of the mythos of Hellboy is that he is long lived, and he and the Bureau of Paranormal Research and Defense have been active for decades, so the stories here are set in different decades. In general, it's not actually relevant to the tales, other than a date arbitrarily placed at the start of each story. Steeped in a gothic atmosphere, Hellboy's adventures taking him to decrepit castles and confrontations on rural, moonlit fields, the stories are deliberately timeless. Creator Mike Mignola doesn't try and root the stories in specific eras -- no adventures set against a backdrop of 1950s Cold War paranoia, or 1960s flower power.

What the collection does pretend to do is arrange the stories in a chronological way, breaking this collection up into sections like "The Early Years", and "The Middle Years". But only the first story -- well, a two page vignette -- really reflects a sense of being from another time, as it features Hellboy as a little boy. Called "Pancakes", it's just a quirky, throwaway little joke piece that, strangely, has a weird resonance, as if Mignola has somehow tapped into some profound human truth. It's cute, it's funny...and it's oddly memorable.

The rest of the tales all feature an adult Hellboy doing what he does best.

And it's another solid collection, the stories (many just ten pages or so) mixing dreamlike atmosphere, spookiness, comic book action, and wry quips and quirky humor. Mignola is a student of folklore, and many tales are based on (or loosely suggested by) genuine folk tales, adding to their sense of resonance and dreamlike logic. The collection is a mix of purely stand alone tales of Hellboy encountering ghosts and demons, with other stories that hint at the over arcing themes throughout the Hellboy saga involving his origins and supposed destiny. As such, it's perhaps helpful this collection includes the story "The Right Hand of Doom" which is little more than a synopsis of relevant earlier adventures, getting you up to speed on the Hellboy mythos.

The short stories are all generally good and compelling, but many are fairly simple -- more concerned with mood and atmosphere than in plot twists or character development. But, again, that reflects perhaps Mignola's folk tale inspirations.

And, as always, Mignola's craggy, deceptively minimalist art is powerfully effective. It's moody and haunting, both understated and deadpan, yet dramatic and bombastic, full of deep shadows and gothic atmosphere, yet also evoking the humor and, yes, the humanity of the characters.

The longest story here is "Box Full of Evil", originally published as a two issue mini-series. It starts out particularly well, full of mood and spookiness, as Hellboy, and pal Abe Sapian, get embroiled in the schemes of some occultists -- as always, the story creating a sense of "reality" by suggesting a history between the characters (Hellboy supposedly knows one of the villains from a previous -- untold -- adventure). Mignola cleverly mixes the eerie notion of a story where not everything is explicit to the characters, with the fact that we, the reader, see and know things the heroes don't. So while the story might end with Hellboy and Abe left slightly befuddled by events, musing "That's strange." -- we actually have a better idea of what's behind certain incidents.

At the same time, "Box Full of Evil" is a mixed bag. As the story progresses, both Hellboy and Abe end up captured and, um, mistreated for a spell, making for a story that is actually a bit unpleasant. That's actually the funny thing about Hellboy -- for all that it's a "horror" comic, and with some genuinely spooky mood, it's generally a clean horror. That is, though nasty and violent things happen, it usually does so with restraint, either leavened with humor, or by Mignola's stylized art, where the gore isn't really that gory. It's horror for those who find the excesses of the modern practitioners of the genre rather...excessive.

The story also dives fully back into the Hellboy mythos, dealing with Hellboy's supposed destiny, and the plan the forces of darkness have for him. In a way, it's actually meant to be an end to that, as Hellboy firmly rejects that destiny. But perhaps the problem with Hellboy is that for all that Mignola is teasing along recurring threads, it's not really a complex backstory, so it's less like he's developing threads...and more like he's just repeating himself. Also, there are some appearances from otherworld beings that don't really make much sense if you haven't read earlier Hellboy stories, including a goblin previously seen in The Corpse (collected in The Chained Coffin TPB) -- not that it's that important. As mentioned, part of the appeal of Hellboy is the dreamlike sense where not everything is explained.

Still, "Box Full of Evil" is certainly a good Hellboy story -- moody, exciting, creepy, yet with some funny quips and wisecracks. Other highpoints in this collection include the aforementioned "Pancakes", as well as "Heads" and "King Vold" -- the latter original to this collection, not having been published previously. As a sampler collection, I'd still give the nod to the previous TPB -- "The Chained Coffin" -- but this is a perfectly enjoyable assemblage of Hellboy tales, too.
Posted by John "Zanziber" Rogers at 6:00 AM
Email ThisBlogThis!Share to TwitterShare to FacebookShare to Pinterest
Labels: Reviews