Death: The High Cost of Living 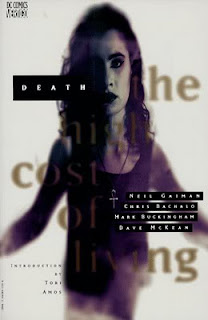 Gaiman does it again. I wish he would have spent as much time writing stories about Death as he did about Dream. I feel that Death could have had a similar, if not bigger, following than the Sandman series did. Alas, that is not the case and we are forced to just a paltry piece of Death.

In this trade, the focus is on a young man who feels that there’s nothing worth living for. We are introduced to him as he’s writing his suicide note, but shortly he is sent out of the house so that his mother can do some spring cleaning in the middle of summer. Why he becomes drawn to a landfill, I’m not entirely certain, but this is where he comes into contact with Death in the guise of a girl named Didi.

We also have the story of Mad Hettie trying to figure out where she left her heart, and she enlists the help of Death to help her find it for her. It’s this task that becomes the centerpiece of this particular trade. She certainly gets around having roles in Sandman, Hellblazer, The Dreaming and her major role in this trade.

While trying to find Hettie’s heart, Death (as Didi) and the young man (Sexton) make their way through the city. They inevitably make their way to a club called The Undercut where we are given a preview of character’s that star in Death: The Time of Your Life trade. I appreciate the continuity that Gaiman provides in both Sandman and Death. I wonder how different Hellblazer would have been if he would have written it?

The main antagonist for this trade is called The Eremite. He has no eyes or mouth, but believes that the ankh of Death contains all her power. Little does he know that the ankh is just a symbol and has no actual power. Death easily replaces it from a street vendor for $10.

The entire story helps Sexton realize that life is worth living, no matter what problems you have. It’s well worth reading and adding to your collection.
Posted by John "Zanziber" Rogers at 6:00 AM
Email ThisBlogThis!Share to TwitterShare to FacebookShare to Pinterest
Labels: Reviews