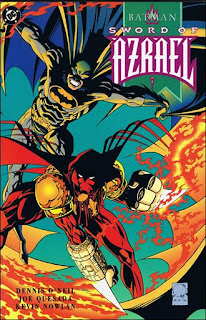 
First, Superman died. Then, Bane broke the back of Batman. In between these two separate events, we learn of a somewhat normal man by the name of Jean Paul Valley; also known as Azrael. In this trade, we learn some of the secrets behind the man that would take over for a broken Batman.

It’s simply called “The System”. Jean Paul has been systematically trained by his father since he was a child. “The System” makes Jean Paul a suitable replacement for his father as Azrael, the assassin for the Order of St. Dumas. How could such a man act as a replacement for Batman? Batman has rules to live by. Batman has a moral compass. “The System” takes that all away and allows Azrael to work on instinct rather than strategy.

The counterpoint to Azrael is the demon lord Biis taken mortal form in Carleton LeHah; a former member of the Order of St. Dumas and final potential victim of Jean Paul’s father. Poetic irony.
Dennis O’Neil is one of the better writers for any of the Batman titles, and pairing his creativity with the incredible artwork of Joe Quesada was a stroke of genius. In the 90’s, I always loved Quesada’s covers, and his sequential works are just as enjoyable. It would’ve been nice to see this pairing more often.

Azrael is probably one of my favorite DC characters. I really wish DC would have done more with the character. I know that after the KnightsEnd storyline, there was an ongoing series that lasted for 100 issues and Jean Paul Valley was killed off. The character of Azrael was eventually resurrected, but Jean Paul Valley actually remained dead.

It’s a small trade, but well worth the read and addition into your collection.
Posted by John "Zanziber" Rogers at 6:00 AM
Email ThisBlogThis!Share to TwitterShare to FacebookShare to Pinterest
Labels: Reviews