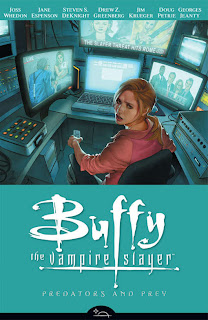 
Stylistically, so far the comics have been a four issue story, preceded, or followed, by a one off story. That formula has been mixed, because -- as you might expect -- some of the four parters haven't necessarily warranted four issues to tell. But here, for the first time, is a five issue collection featuring five different stories. And creator/writer Joss Whedon has got around to recruiting some of the writers who worked on the Buffy TV series to join him in comics, with four of the five issues here written by old Buffy TV veterans (actually, this is the first TPB collection in which Whedon himself hasn't written at least one issue).

Another stylistic quirk is how the five (shorter) stories are used to explore the Buffy "universe", with Buffy featured in a couple of the stories, but barely appearing in a few of the others, as the focus shifts to Faith & Giles (already featured in an earlier story arc -- No Future For You), Kennedy, or characters original to the season eight comic book world, as we look in on Satsu.

And the opening issue features...Harmony. Yeah, Harmony, from the TV series -- high school diva who was turned into one of the undead. Harmony persuades a TV crew to follow her around for a new reality series about vampires -- Paris Hilton with fangs, essentially. Although initially no more than a cultural blip, much to Buffy and the gang's consternation something happens to turn Harmony into a media star. Which becomes a bit of what you'd call a game changer, as Buffy and her Slayers find that if it isn't bad enough fighting the forces of darkness, and being at odds with the military of most governments...now they've even lost the war for public perception. Vampires are suddenly trendy and cool...and Slayers are perceived as the bad guys. As a story, it's a decent tale, weaving threads involving Harmony, with a newly empowered rogue Slayer, as well as Buffy and her gang. The handling of the new Slayer and her motivation is nicely done. The concept is both an obvious satire of the reality TV trend, but also maybe a dig at the vampire-lite genre, novels and TV shows where vampires instead of being the creepy undead are embraced as cool and sexy by fandom.

Where the story is a bit problematic, I'll admit, is in the rather major way it changes the "reality" of the franchise. Okay, it's hard to say what the reality was. Even in Buffy's Sunnydale days on TV, there was always the coy question about how much "normal" people knew or suspected about what was going on regarding vampires and demons. But it seems like such a sudden shift to abruptly have it be that the whole world knows about (let alone accepts) the existence of vampires. It probably warranted a few more issues to develop the idea. Essentially, Buffy goes from a series set in, more or less, "our" reality, to a series set in a fantasy/sci-fi parallel reality. In a way, it just cements my feeling that Season Eight isn't just a Buffy TV season presented in comics...but is Buff re-imagined as a comic book property with the emphasis on outrageous special effects, giants, flying, etc., and now basically taking Slayers, vampires, and the whole supernatural reality public, borrowing the whole X-Men milieu of heroes "feared and hated by the world they've sworn to protect".

The tell-it-in-one format of these stories allows the comic to indulge in a little house cleaning, or at least touching on some on going story threads, and looking in on wayward cast members. So we have a couple of almost completely Buffy-less issues. One looking in on Satsu being visited by Willow's girlfriend, Kennedy, in Japan, and they and their cell of Slayers investigate some sinister new Japanese toys (in a story with a not inappropriate but somewhat heavy handed feminist sub-text) -- neither Kennedy or Satsu are among the series' best characters, but successfully carry a 23 page story. Another looks in on Faith and Giles (neither seen since issue #9) investigating a mysterious town that supposedly offers sanctuary to Slayers who no longer wish to be Slayers. As well there's an issue where Buffy -- teamed with Andrew -- gets into an altercation with Simone -- a Slayer gone rogue and who had been referenced in a few earlier issues. And another Buffy-heavy issue is perhaps the most significant continuity-wise (other than the Harmony issue) -- wrapping up the long running Dawn-under-a-cursed-spell sub-plot that had started out clever but, frankly, had long since seemed like an idea in need of a point.

If one wants to poke around for deeper meaning, in the context of the Slayers-as-pariahs theme, a number of the stories here revolve around safety and sanctuary, and the notion that although there might be comfort in hiding, it's not necessarily the right thing to do.

As you can probably guess, this isn't the best volume to just sample if you haven't been following Season Eight, as you won't really know who some of these people are, or what the significance of the stories may be in the larger context. At the same time, because you get five stories, as opposed to the usual two-per-collection, it makes for more-for-your-money and an agreeable anthology. None of the stories are perhaps exceptional, but all are enjoyable page turners. The Harmony and the Faith episodes are arguably the best but they all happily weather subsequent reads. All boast the requisite mix of Buffy-esque quips, character examination, deeper themes, and action. And, by virtue of being shorter, the plots don't over stay their welcome.

Regular artist Georges Jeanty draws most of the issues, and as the Buffy Season Eight wears on, I find myself getting increasingly mixed on him. Not so much because there's any change in his style, or drop in quality, merely that I just find myself more conscious of the things I'm less fond of, the cartooniness, the big heads. But I admire his eye for, and attention to, detail. Though why his depiction of Dawn as a wooden doll actually evokes actress Michelle Trachtenberg more than his depiction of a flesh and blood Dawn I'm not sure! Cliff Richards pinch hits on the Faith/Giles issue and though his style is similar enough to Jeanty that there's not a glaring shift, I kind of like him more, his work a little more realist -- actually more so than some of his work I'd seen on the earlier era of Buffy comics (the non-canon comics). He also evokes actress Eliza Dushku quite well. Jeanty or Richards, the art remains, as always, perfectly okay.

I said that I'm not sure this is a good one to start with if you haven't been following the Season Eight run. But conversely, the five-for-five (or five-by-five if you like Buffy references) story format maybe makes it a nice sampler. The other Buffy TPBs you basically like -- or dislike -- for the primary story collected. Here, you can enjoy it as just a little collection of Buffy (Universe) tales to keep on the shelf, and to revisit from time to time. And even if someone might wonder "Who's Satsu and why does she warrant an issue?", conversely, the basic plots are reasonably self-contained, and many offered up by veteran chroniclers of Buffy's TV exploits.
Posted by John "Zanziber" Rogers at 6:00 AM
Email ThisBlogThis!Share to TwitterShare to FacebookShare to Pinterest
Labels: Reviews