Buffy the Vampire Slayer Season 8 Vol. 4: Time of Your Life 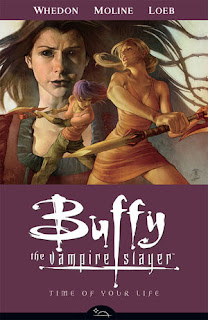 The fourth "season eight" TPB collects the four-part "Time of Your Life" story, wherein while investigating some cryptic portents of a temporal disruption, Buffy gets catapulted into the distant future where she comes face-to-face with the future Slayer, Fray -- with a mysterious foe manipulating things behind the scenes. Also included is the one shot tale "After These Messages...".

This "season" of Buffy seemed to be relying a little too heavily on trotting out the old toys. Getting a bit too mired in rehashing continuity like a, well, like a comic book. And this continues that with Buffy meeting Fray. Fray was Joss Whedon's first foray into comics, back when the Buffy TV series was still on going, chronicling the adventures of this far future Slayer in a world where no one even remembered what vampires were -- calling them Lurks. It was essentially Buffy meets "Blade Runner". And it was the first example of Whedon treating a comic book as part of official canon, as it marked the first appearance of Buffy's axe, The Scythe, before it was used in the TV series! I had read Fray, and liked it, but I suspect this story will be a mite confusing if you haven't read it. Even I found Whedon's plunging us back into the milieu of Fray, her friends and foes, and the future slang, a bit confusing, as there's little effort to re-aquaint us with a character and milieu that first saw print some six years earlier (with only one other appearance in the Tales of the Slayers anthology in between). Still, to further cement the Fray reunion vibe, the art chores are handled, not by season eight regular artist Georges Jeanty, but original Fray artist Karl Moline.

This arc also sees the return of Kennedy to the fold, after only being alluded to previously (and seen in a brief flashback in issue #10). Kennedy wasn't perhaps the most popular character introduced in the TV series (not really a fault of the actress) but she is part of the mythos, so it's nice to have her brought back (and not get killed off in a pointless scene!)

Since the "season eight" has been heavy on the cryptic hints and vaguely teased sub-plots, reading "Time of Your Life" can seem a bit frustrating, as the villainess behind Buffy's displacement seems to be playing all sides, offering different explanations to each, so that you suspect it's going to build to a non ending question mark. But it doesn't -- sort of. Well, there are big questions, but not necessarily of the kind that make you assume this all is just a set up for a future story arc, so much as questions that you suspect are meant to remain cryptically unanswered (kind of like the origin of Anya's fear of bunnies in the TV series). Though I'm writing this before season eight has concluded, so who knows? So after a reasonably diverting romp of Buffy and Fray running about in the future, with the requisite amusing quips -- while we cut back to an unrelated attack on Buffy's modern day Scottish stronghold by the forces of this season's Big Bad, Twilight -- the story does build to a strangely poignant climax.

Though as a Fray story, it's more just a reminder the character exists, and to satisfy fans who had long clamored for a Buffy/Fray crossover, rather than as a true showcase for the character.

The problem with doing a comic that is so heavy on tying into the continuity of a TV series is sometimes the comic wants "revelation" scenes which can be a bit vaguer than intended simply because you aren't quite sure who the person is supposed to be -- because the artist doesn't quite capture the actor's likeness. I'll admit, when the villainess is revealed at the end of the second chapter...it still took me a bit to realize who it was! Likewise, in a cutaway to a (unresolved) sub-plot, another character emerges from the shadows who left me kind of sure I knew who it was supposed to be, rather than sure-sure.

The one off issue also pays homage to past continuity -- sort of. There had been talk of a Buffy animated TV series a few years back that never managed to hit the airwaves. So "After These Messages -- We'll be Right Back!" tips its hat to that in a story where Buffy has a dream, flashing back to her high school days (when the animated series was intended to be set) and drawn in a cartoon manner. Written by Jeph Loeb and drawn by artists who had been involved in developing the aborted series, it also acts as a nice "flashback" to the milieu of the early seasons of the TV series. Some reviews I read took exception to the sub-text of the story, which seemed to be suggesting this was a more simple, innocent time for Buffy -- when it wasn't. But I don't think the intent was to be pejorative, so much as just to contrast a time when Slaying was a part of her life...with "season eight" where it's now her entire life. And in light of the changes to the Buffy "reality" in the very next issue (collected in the TPB Predators and Prey) it perhaps takes on added resonance. It's actually kind of enjoyable for its nostalgic tone...

..though I would argue it draws attention to precisely what's wrong with the season eight concept.

Like with too many modern super hero comics, Buffy "season eight" is losing touch with the notion of a "real" foundation. With Buffy living in rural Scotland, surrounded by Slayers and Wiccans, there's none of that grounding normalcy of Buffy and her friends dealing with school and jobs and relationships. And physically removed from society, there's less opportunity to tell stories, as the TV series did, of Buffy investigating occurrences and crimes that aren't directly related to her. Which is why there's so much emphasis on villains targeting her and on referencing past continuity. In a way, it's the season eight continuity that's simpler, more innocent, and the earlier era that was more messy and complicated!

I find myself ping ponging back and forth on "Time of Your Life" more than I have for most of the other arcs. In my initially posted review, I had commented that I was mixed about it reading it in monthly installments, but enjoyed it more re-read all together. Yet re-reading it now -- yet again! -- in the context of re-reading all my "season eight" comics, I find it slipping down in my estimation once again. "Time of Your Life" is fast paced, to be sure, but to the point where it can just seem...busy. Lots of running about, jumping, fighting, but all in service of a rather nebulous plot. As mentioned, the orchestrator of the action is playing all sides, so you're not really sure what is true -- or even if -- making the whole saga a bit of red herring...or even a shaggy dog story. There are some funny, Whedon-esque quips, most certainly, but as a whole it can seem kind of muddled.


The problem, overall with season eight, is just a sense that there's too much emphasis on the story arc, the cryptic foreshadowing and such, without enough sense they really are taking us anywhere (or anywhere soon). Some revelations seem to come out of nowhere, instead of being carefully foreshadowed (such as the bank robbery in issue #10) whereas others seem to get resolved rather anti-climactically (such as the romantic sub-plots in the previous arc, Wolves at the Gate). Heck, this story arc begins with the characters following up on a scene from the previous arc...yet re-reading that earlier scene, it didn't actually present the clues the characters start out with here!
Posted by John "Zanziber" Rogers at 6:00 AM
Email ThisBlogThis!Share to TwitterShare to FacebookShare to Pinterest
Labels: Reviews