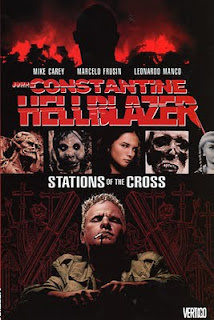 ISBN: 1401210023
Price: $14.99
Publisher/Year: Vertigo, 2006
Artist: Leonardo Manco, Chris Brunner, Marcelo Frusin, Steve Dillon
Writer: Mike Carey
Collects: Hellblazer #194-200
Rating: 3/5
John Constantine has lost his memory, to the extent that he can't even recall his own name. But unfortunately for him, Hell remembers him all too well. Constantine is in London in the aftermath of what looks like a bomb blast when he encounters Rose, a young girl with burns on her arm, trying to do some fishing amongst all the chaos and destruction. He takes Rose to the hospital, which is busy and crowded with disaster victims.

However Rose isn't all she appears to be. Moreover, Constantine manages to come to the attention of a large man with a love of violence. This guy seems to know everyone's darkest secrets, and he enjoys telling them the awful truth about themselves, preferably just before they die. This graphic novel is bloody, flinch-inducing and dark, therefore not recommended for younger readers.

Like the main character, the reader is left disoriented by events. Stations of the Cross is best read in the context of the previous Hellblazer trades, although since the plot deals with memory loss it can also be enjoyed as a stand-alone work.

Constantine tends to attract demons, and he finds that people around him are likely to die all too often. This graphic novel is full of a gritty oddness, and it's somewhat reminiscent of Neil Gaiman's Sandman series (Mike Carey has written some comic strips set in the Sandman universe), although it has less in the way of familiar mythological references. This work mixes dark magic with modern times.

Constantine blunders, or is pushed, into the premises of a cultish church led by a charismatic "savior". The chain-smoking occult antihero is faced with enemies from this world and the netherworld, and he's without his usual abilities. He's in the dark, unable to do much more than act like a victim. But his battle is about much more than mere physical threats. John also has to deal with temptation when he's offered a way out, although the price could well be higher than he can imagine.

It's drawn by a number of different artists, so it doesn't have the consistent look of a single artist's work, which is a shame. The mood is macabre, with the reddish tint of Hell predominant. The visual aspect is reasonably well done and always clear; although this is probably not something you would read purely for its artwork.

Constantine is a cynical character who manages to maintain a black sense of humor in the face of demons, adversity, and the threat of death or worse. But of all his enemies his worst one is usually himself, which is one thing that makes Constantine so likeable. His misadventures in Stations of the Cross should hit the right note for fans of dark and edgy occult horror.
Posted by John "Zanziber" Rogers at 6:00 AM
Email ThisBlogThis!Share to TwitterShare to FacebookShare to Pinterest
Labels: Reviews