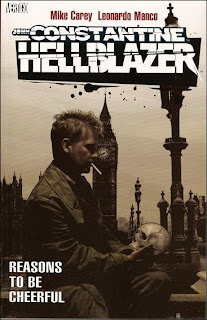 Hellblazer is really one of the great success stories in modern comics. Introduced as a minor character (an annoying one at that) in Swamp Thing, John Constantine got his own series in 1988 and will soon be celebrating its 20th anniversary. Contrast that with so many far more well-known comic characters who have had multiple failed series in that timeframe. What has seemingly kept Hellblazer chugging along for two decades is the outstanding consistency of the writing and art, and the uncanny continuity of the storylines no matter who is writing them. This is also a series that is perfect suited to be collected in trade paperback format as the complex storylines work better when read in a single sitting.

“Reasons to be Cheerful” collects issues #201 – 206 of the regular series. The title story makes up the four-issue meat of the book while the outer pieces of bread unfortunately don’t fit as well…like a ham sandwich on raisin bread…The opening tale is perfectly fine…a solid story…it just doesn’t fit with the rest of the book. When a trio of thieves break into a storage unit owned by Constantine, they make off with a bracelet that holds doom for whomever touches it’s black stone. A nice, cursed artifact type tale.

In the main story, Constantine’s trio of offspring by his unholy union with the demoness Rosacarnis have been unleashed on the world, determined to make their father’s life a true Hell on Earth. But rather than attack him directly, they instead hurt Constantine where it matters most…by killing all of the people that he cares fore, one by one, and often in the most gruesome ways. Constantine finds aid in an unknown ally…a demonic presence who has hidden himself within the body of Constantine’s pal, Chas. But this presence is keeping its true identity a secret for now.

Constantine is brought about as low by these attacks as we’ve ever seen him. He can handle any attacks on himself but the attacks on his loved ones, including his girlfriend Angie, and niece Gemma, show off a vulnerable side to his humanity that we’ve rarely seen. Unfortunately, if you want to read the climax to this story you’ll have to buy the next trade paperback that comes out because the end of this book segues directly into the next, without benefit of even a hint of a conclusion. I guess one can see it from DC’s prospective. Putting the entire story into one book would have doubled its size and trades generally collect only four to eight issues. Still, it left me disappointed a bit, and now, having to wait impatiently until the next volume comes out.
Posted by John "Zanziber" Rogers at 6:00 AM
Email ThisBlogThis!Share to TwitterShare to FacebookShare to Pinterest
Labels: #ThrowbackThursdays, Reviews