The Sandman Volume 9: The Kindly Ones 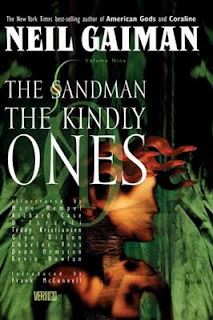 Title: The Sandman Volume 9: The Kindly Ones

If you're interested in ancient religion you may have heard of the Erinyes of Greek mythology. Also known as the Furies if you happen to be a Roman, or the Kindly Ones if you don't want to offend them, they were symbols of vengeance, personified as three women. The three had a tendency to get particularly hacked off if you inflicted harm on a member of your own bloodline, hounding the perpetrators of such crimes until they were reduced to gibbering wrecks. The Erinyes first appeared in The Sandman to help Dream find his artifacts, way back in Preludes and Nocturnes.

The particularly attentive will be aware that Dream, the Sandman himself, spilled a bit of family blood back in Brief Lives. And with a relatively minor character from The Doll's House believing that Dream has kidnapped and murdered her son, she invokes the Furies to hunt him down.

It's the perfect excuse to hook up with many of the characters from previous volumes, as the Furies run riot through Dream's creation in an attempt to destroy him. There's a strong feeling that, despite its length, this series was always heading towards the conclusion of this volume, which is helped by the reappearance of so many familiar characters.

Considering the number of artists partaking in this exercise, the book is surprisingly coherent on a stylistic level. Perhaps it's because most of the characters have an established likeness, though this takes nothing away from the artists themselves, who seamlessly marry the drama with the fantastic.

For an ongoing series with a finite end, The Kindly Ones is a landmark of excellence, especially on the part of Gaiman who can barely be faulted. Providing the fans with exactly what is required while gathering seemingly disparate and throwaway strands into an epic war of the supernatural, it's a Gaiman tour de force. There's little point starting your Sandman journey here, but it's books like this that make the voyage so worthwhile.