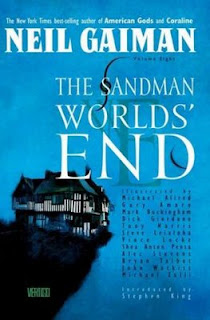 The basic premise lies around an inn called the Worlds' End. Although this looks a little like a horrifically stereotypical old-fashioned English pub - the kind of establishment where a buxom wench might serve a flagon of ale - it's actually quite unusual. Perhaps inspired by Douglas Adams' Restaurant at the End of the Universe, the Worlds' End appears when something major happens in the universe; when something occurs that's so big and so resonant that time and space collide. This can cause unusual storms that the inn provides shelter from, making it a place where people from the multitude of worlds created by Gaiman during his Sandman writings can come together for shelter. And, while they're there, they tend to spin the odd yarn to help pass time. Some of the characters in these stories are familiar, others completely new.

There's no denying that Gaiman is good at working a short story, as he's already proven in Dream Country and Fables and Reflections. There's nothing here that impacts on the main Sandman story though, except for a few portents of what's to come in the future and some fleshing out of incidental characters. It's more of a showcase for Gaiman's imagination, though fans of his work will see no issue with that.

Art wise, each story has been dished out to a different artist, with Bryan Talbot left responsible for illustrating the main back-story at the inn, which holds the individual tales together. Mixing up artists like this can make for a mixed bag, but this is one occasion where it works beautifully, partly because of the way the story is segregated - there's no real need for coherency since the individual stories feature different sets of people.

Although difficult to describe as much more than a filler volume, it's high-concept filler with a classy feel to it. Gaiman is undoubtedly one of the best story tellers in comics and this package shows off his art well. The only disappointment, from the view of a Sandman fan, is that there isn't much Sandman in it.