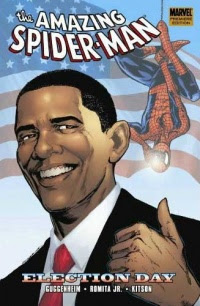 ISBN: 9780785141310
Price: $29.99
Publisher/Year: Marvel, 2009
Artist: John Romita Jr., Barry Kitson, Fabrizio Fiorentino, Patrick Olliffe, Marcos Martin, Todd Nauck
Writer: Marc Guggenheim, Zeb Wells, Matt Fraction
Collects: Amazing Spider-Man #583-588, Amazing Spider-Man: Extra #1 & 3
Rating: 2/5
Election Day collects a five part arc (plus a few shorter tales). But even though the first issue is labeled "chapter one" -- it's actually the climax to plots that began much earlier. Still, at least modern Spider-Man comics begin with a tabloid newspaper type opening page, recapping what's been going on, making it more new reader friendly than you might think. Granted, other stuff is just assumed -- like things relating to Harry Osborn's background (though even that is more or less filled in as you go). Now why the fourth issue in the arc is labeled "chapter three" is anyone's guess!

Anyway, the main thrust of this arc is that we're counting down to the election for Mayor of New York (yes, despite real life president Barack Obama being featured on alternate covers for this collection, it's not his election to which the title refers), which some of the regulars have stakes in. Meanwhile, a super villain, Menace, also has an interest in the outcome. And Spidey is the chief suspect in a string of murders where his spider tracer devices have been found at murder scenes.

And to be fair, most of these threads all come to a climax in these pages and, more or less, resolve.
And I wish I was more enthused about the results.

Part of the problem with series that have been around for so long (almost 50 years of Spidey!) is it's hard to find that new or novel story to tell -- at least while still staying within the parameters of the characters and their world. And, more, being a reader who has read so many comics over the years, it's awfully hard for me not to see echoes of other tales. Yet I recently read Clandestine Classic and in my review remarked that the opening arc for that series was vaguely clichéd...yet I still thoroughly enjoyed it, because writer/artist Alan Davis managed to take a familiar idea, and enliven it with his unique telling of it.

Old plots can be refreshed by the characters that inhabit them. And here there's certainly a use of a supporting cast -- but not in a way that they particularly make an impression. Granted, a long-time reader might have a different view. Nonetheless, this is five issues...plenty of time to make me interested in, or care about, the characters -- and it didn't. Heck, mayoral candidate Bill Hollister barely exists as much more than a plot point. I mean, are we supposed to be rooting for this guy or not?
And reflecting the modern trend in comics, there are a lot of big panels, and a lot of stretched out scenes. There's the obligatory scene of J. Jonah Jameson going on TV to rant about Spider-Man -- things he's been doing since the 1960s! Yet Guggenheim devotes a whole page to it. Part of the fun of long running series is the cozy clichés, sure...but don't belabor them unless you have something new to say/do with 'em.

The story can move at a glacial pace at times -- supporting character Carlie Cooper makes a discovery in #584, leading instantly to a conversation...that she's still having in #587! Although in that time/spatial distortion common to storytelling in any medium, in that same five minute span...Spidey is able to cross the city, get into a fight with Menace, and get captured and arrested by the police!!!

It's not that Election Day is bad, but I just found myself flipping through it to get to the end, rather than because it involved me as a story. A little while back, Marvel did a controversial Spidey story to re-set the bar on the series (hence why long dead Harry Osborn is now healthy and hale and back on the team), and supposedly it was to provide a needed shot in the arm for the franchise. But I'm just not seeing it, based on this and the few other recent Spidey stories I've read (like Kraven's First Hunt). It all feels like the creators are running on fumes, recycling old ideas, without finding that new or inspired twist to make them live again. Even Spidey's quips, though amusing, feel a bit belabored -- sometimes the funny, snappy line is funny because it's, you know, snappy. And everyone seems to talk with the same sort of patter. And that's not even getting into the idea that there used to be a contrast, with Spidey both the wisecracking smart ass...and the grim, melancholy brooder (something better reflected in the back-up story, "With Great Responsibility Comes Great Power").

And I have a long, up and down relationship with John Romita Jr's art. I do kind of like his sense of composition, of storytelling, the action and energy he brings to fight scenes. But he also has a deliberately stripped down, cartoony style. Sometimes that sort of style can actually add to the realism of a story -- ironically -- as through caricature the characters can come alive. Yet here, his faces and expressions are fairly rudimentary and bland. If you were to remove the dialogue balloons from many of the scenes...you probably wouldn't be able to guess what the underlining emotion of the scene was.

Rounding out this collection are four short tales, most decent enough, some filling in gaps in the main story, some unconnected. One story is the "famous" one where Spidey meets President Obama (hence why the prez gets his face on the cover of some editions of this collection) -- Republicans need not feel slighted, though, as Sen. McCain also appears, and is also treated with uncritical adoration.

Now, obviously, this collection will probably read differently for someone who has been following the issues leading up to it. But as I've said before, I often just review these things from the point of view of saying, I picked this randomly off the shelf, an' here's what I thought of it.

There are lots of different criteria for judging the success of a story -- no one more valid than the other. But one of them is to ask, not just how much did the story interest you, but how much did it interest you in the greater series. Despite being the climax of long brewing threads (the election, the Spider-Tracer Killer, the identity of Menace) nothing here really made me curious to track down the preceding stories to fill in blanks. Nor inspired me much to see where things went from here.
Posted by John "Zanziber" Rogers at 6:00 AM
Email ThisBlogThis!Share to TwitterShare to FacebookShare to Pinterest
Labels: Reviews