Lucifer: A Dalliance with the Damned 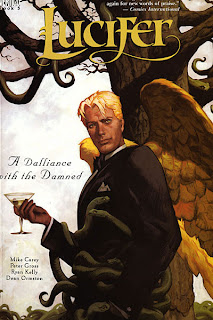 Title: Lucifer: A Dalliance with the Damned

As much as I don't really care for this series, it seems as though I keep getting drawn back to it. I think that I subconciously hope that it gets better. If I buy another volume, I hope that happens sooner rather than later.

The stories are hard to get through, and much of the art is not something to appreciate. As I have said before, the fonts they chose for much of the lettering strain my eyes.

As you can tell by my previous reviews, I don't have a problem with the Vertigo line as a whole. Preacher was good. Sandman was good. Fables is excellent! Why did they decide to take a crap on a title like Lucifer? This could have been good, if writers, editors and artists could have come together for a quality product instead of what was published.

For those who enjoy this title and series, I can only say that we must agree to disagree. Mike Carey did a decent job with John Constantine. Why couldn't he have given the same attention to Luficer? The series not necessarily the entity.

At the date that I have written this review, the only other trades I have given such a low rating are:

That should give you an idea of how often I actually get to read a "bad" trade. I'm not sure if I will ever get around to picking-up the next volume of this series to give it one last chance, but if I do it I'll make sure I receive a deep discount either with a coupon or buy it used so I'm not wasting as much money as I already have on this series. Fortunately, I'm positive that when I bought the volumes that I have reviewed, I used a coupon from Borders from between 33-50% off the cover price. Thank goodness for small favors.
Posted by John "Zanziber" Rogers at 6:00 AM
Email ThisBlogThis!Share to TwitterShare to FacebookShare to Pinterest
Labels: Reviews