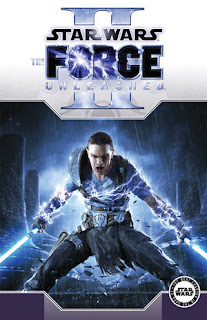 With the release of the new video game, so comes the release of this new trade. The saga and the franchise continue. How they could seriously continue after the ending of the first, I wasn’t sure. There’s a part of me that wishes I wasn’t such a die-hard Star Wars fan.

For starters, I received the video game as a birthday present. That same day, I sat down and began to play it. About 8-hours later, I had completed the game. No cheats. No strategy guide. The original game took me several days to complete, and I needed a strategy guide to get past bringing a Star Destroyer down onto a planet. I was very disappointed in the game, but I thought that the trade would tell a better tale.

I was so wrong.

The only part of this trade that is worthwhile is the art and Boba Fett. If they had horrible artists and didn’t include Fett, this trade would be totally worthless. The upside is that, unlike most of the Star Wars trades I’ve purchased, the binding didn’t fall apart when I opened it to read. For this, I am thankful.

If you’re curious about the story surrounding the video game, find someone who has already bought this trade and borrow it from them. Maybe you can check it out from your local library. Fortunately, I had a 40% off coupon when I purchased this trade. If I had paid full price, I would have contacted Dark Horse for my money back.
Posted by John "Zanziber" Rogers at 6:00 AM
Email ThisBlogThis!Share to TwitterShare to FacebookShare to Pinterest
Labels: #ThrowbackThursdays, Reviews