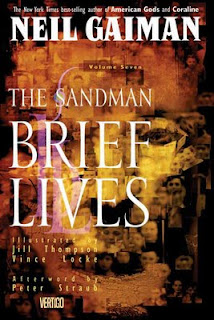 When members of the Endless meet, they often refer to the missing sibling, the one who went away.

Destruction, we have learned over the course of Neil Gaiman's Sandman series, gave up his duties and left his realm. Now Delirium, the youngest sister who was once Delight, decides to go and find him. She tries to enlist sister Despair and brother/sister Desire for their aid, but both refuse. (The scene in a B&D club, where Delirium meets with Desire after mistaking a pale goth chick named Lisa for her eldest sister Death, is priceless!) So she turns to her scary bigger brother, Dream.

Dream, for all that he's a being older and more powerful than the gods, has never learned to handle romance well. Delirium finds him moping about his castle, which is bathed in endless rain, because he's lost his latest love. (Pity poor Abel, who lives in a low spot.) The talk, and snack on salad, an omelette and raspberry-cream chocolate lovers, and she asks for his help finding their missing sibling.

Dream has almost always been stern and aloof in his dealings with mortals, gods and Endless alike. But for a moment, faced with his youngest sister's tears and her ready assumption that he'll reject and mock her, the coolness cracks. A glimpse of genuine affection shows through. And he agrees to go with her -- not so much out of a sincere desire to find Destruction, but simply for the journey itself and the distraction it will provide.

The pair of Endless begin by trying to contact those who knew Destruction before his disappearance 300 years before. That means calling on some of the immortal mortals and incognito gods who live among the normal people of the world. But as the adventure begins, bad things start happening to them. Take for instance Bernie Capax, who has spent roughly 15,000 years of life as one form of lawyer or another, and whose reaction to his sudden impending demise is to scream "Not yet!"

Others among the long-lived are more crafty. Etain just manages to escape an explosive death in one city, while the Alderman pisses on his clothing and becomes a bear. (Really!) Meanwhile, the elusive Destruction is off on an island someplace, painting landscapes, writing mediocre poetry, sculpting, um, things, and debating philosophy with a dog. (Really!) And then he gets it in his head to learn to cook....

Meanwhile, Dream and Delirium are having adventures in the Waking World. They call on Pharamond, the last of an ancient Babylonian pantheon of gods, for transportation, and Delirium makes some frogs. They cross the Atlantic by plane, meet their spunky chauffer and head out across the country. They chat with the dead lawyer's confused son, stop in a hotel, where Delirium blows bubbles, and experience a nasty fire. Delirium learns to drive -- a scary prospect indeed, even with a raven to help her -- and covers a cop in imaginary bugs.

And they meet the once-goddess Ishtar, who was Astarte and Belili, and who now dances and strips in a roadside bar for tips. After their encounter, Ishtar dances -- really dances -- and the customers get much more than they paid for. Her last words are a potent commentary on the nature of deities, how they begin and end: "We start as dreams. Then we walk out of dreams into the land. We are worshipped and loved, and take power to ourselves. And then one day there's no one left to worship us. And in the end each little god and goddess takes its last journey back into dreams ... and what comes after, not even we know. I'm going to dance now, I'm afraid."

The goddess Bast, meanwhile, plods on in a world with little thought or time for her. But as long as the world has cats, it will have Bast.

Throughout, we learn more about Destruction via flashbacks (a 17th-century London epidemic, for instance, and a dissecting room in the Age of Reason), and he's not the God of War-like being you might expect. Rather, he's bluff and hearty, quick to smile and quicker to laugh. He defines his province as change, and he's in love with existence. He doesn't take offense quickly, even when no one will eat the food he lovingly prepared.

His long-awaited meeting with his siblings is not when anyone -- reader or character -- would expect. And his words cast doubt on the very nature of these characters we've been following so avidly since the series began.

We learn more about the ever-changing Delirium, too. Her drifting thoughts, her spontaneous creations and frequent non sequiturs on subjects ranging from vitreous humor to mango juice, give the book a sparkling life. We also get our first glimpse of her realm, which is not for the faint of psyche. Her two-page summation of the entire story so far doesn't quite replace the preceding books, but it does make for an interesting interpretation.

And the story of Orpheus, the tragic son of Dream, finds its conclusion.

But our protagonist remains Dream, and the events of this book seem to have an extreme impact upon him. It's odd to think that a being so old, so eternal could still have things to learn ... and yet he does. And changes in him are evident almost immediately.

And the events of this book will have repercussions in the stories to come. If you haven't started reading The Sandman yet ... what are you waiting for?