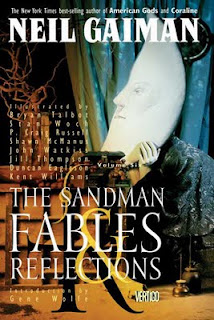 Like the Dream King's inexhaustible pouch of raw dreamstuff, this next volume in the Sandman series is a mixed bag of stories and styles -- more a collection of illustrated short stories than an ongoing drama like so many other volumes in the series. But Neil Gaiman has proven himself a talented short story writer, so the change in format is neither abrupt nor disappointing. At worst, a reader might consider these brief pieces a diversion from the major storylines; at best, they'll see them as quality stories in their own right, connected but not bound to the overall epic tale.

The book opens with "Fear of Falling," a neatly written, poorly drawn story about a theater director who's lost his nerve. While there's a nice lesson to be learned when the young man stumbles onto Dream in his dreams, the art by Kent Williams left me cold.

Much better is the next tale, "Three Septembers and a January." Not only is the story one of my favorites in the series, it comes with an excellent visual component drawn by Shawn McManus. (Each chapter in this volume has a different artist, accentuating to the tangible differences between them.) In this story, we meet Joshua Norton, a failed San Francisco businessman who has fallen into the realm of Dream's sister, Despair. She challenges her brother to prove that dreams can save a man from despair, and he accepts the task.

It is September 1859, and Joshua begins to dream. Soon he proclaims himself Norton I, the emperor of the United States. Over the course of the next 16 years we see Norton rubbing elbows with a not-yet-famous newspaperman named Samuel Clemens, as well as the various attempts by Endless siblings Despair, Delirium and Desire to claim him, and yet he remains firmly in the realm of Dream ... until the eldest sister, Death, takes him in the end.

As sister Delirium declares: "His madness keeps him sane." And indeed it did. (As fantastic as this story sounds, it's actually based on fact. Well, except for the bits about Dream and the Endless. The history of Norton I is quite fascinating to read! For instance, he was deemed mad by some for commanding the construction of a bay bridge to Oakland, and yet years later, the Golden Gate Bridge was built just as he wished.)

The next chapter is an intriguing tale of Johanna Constantine, set in England and revolutionary France, 1794, when she is hired by Dream to reclaim something he's lost. Then Gaiman takes us to the ancient steppes of Russia for a fable involving a roaming peasant lad, lycanthropes, the witch Bab Yaga and a librarian who has lost a book that was never written. The lad makes several wise exchanges, gains that which he sought and finds what he needed. Flash back to ancient Rome with a wise dwarf and the Emporer Augustus a'begging in the marketplace. Forward again to 1273, when a young Marco Polo encounters his own descendant and a roving location in one of the "soft places" of the dream realm. Then back to ancient Greece to see the tragic wedding of Orpheus -- the famed minstrel who was the son of Calliope, the Muse, and Oneiros, also called Dream -- and Eurydice. Anyone the least bit familiar with Greek mythology knows the circumstances which must follow, but Gaiman has woven them into his own mythology to set up events in future storylines. (We also learn, inexplicably, that the proper response to being clubbed in the head by a naked member of the ravenous Baccheae is the word "Ut." To be followed by copious bleeding.)

Next we meet Daniel, the son of Lyta and the faux Sandman we first glimpsed in The Doll's House storyline. The young boy, conceived and born in a dream, is a powerful dreamer himself, and in this tale his dream takes him straight into the Dreaming and the homes of Cain and Abel. Each brother and their mother, Eve, tell Daniel a story -- about the Parliament of Rooks, about Adam and his three wives, and about Li'l Death and Li'l Morpheus and the "loving" brothers they met on Earth.

The volume concludes with prosaic tale of old Baghdad, a new fairy tale which tells why the story, and all its ancient glory, may never be forgotten.

Fables & Reflections hops through a broad range of times and places in its 250-odd pages. Some of the stories are simply that, and are completely self-contained. A few pick up the threads left hanging in earlier volumes, while others set the stage for things to come. But each adds a bit more to the still-growing lore of the Endless and furthers the journey of Dream through Gaiman's vision. And never a page is wasted along the way.