The Sandman Volume 5: A Game of You 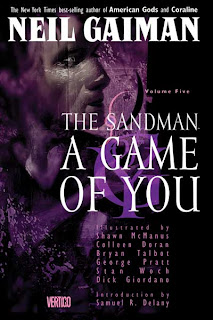 Title: The Sandman Volume 5: A Game of You

The concept of a dreamworld that's real and can be visited repeatedly by a dreamer is hardly new. Alice did it, perhaps best of all the dreamers, which is likely why Neil Gaiman included a passage from Lewis Carroll's Alice's Adventures in Wonderland at the start of this book.

The concept in A Game of You is The Land, which has been visited for a long time by dreamer Barbie, whom we previously met in Gaiman's earlier volume, The Doll's House. Now separated from husband Ken and living in a New York apartment house, Barbie has ceased to dream ... and the denizens of The Land are worried. Without their princess, they are suffering under the cruel tyranny of the mysterious Cuckoo, and several friends -- a giant dog/lion named Martin Tenbones, the parrot Luz, Prinado the organ-grinder monkey and Wilkinson, the Murphy-lovin' trenchcoated rat -- try to find her.

There are also several real-world friends involved in this story: Wanda the transsexual, the deceptively sweet Thessaly, a dog-phobic baglady, and lesbian lovers Hazel and Foxglove (the latter of whom has a gruesome connection to the climactic chapter of Preludes & Nocturnes). There's also George, but he's decidedly not a friend, especially after having his face skinned off and nailed to a wall.

We learn a lot about Barbie's friends through their dreams, and we learn about Thessaly, too, because she doesn't. Suffice it to say, she's not the vanilla sweetheart we were led to believe. And Barbie has returned to The Land and won't be coming back without some kind of resolution. Of course, that will have far-reach effects back here in our world, so Thessaly leads Hazel and Foxglove on a rescue operation into the Dreaming.

The adventure which follows could have been another in a long line of fantasy books in which a mismatched set of earnest and comical characters set off to defeat the Evil Threat in whatever fantasyland the author has chosen. But Gaiman doesn't do things the generic way. There is still a series of violence, mistaken identities, an unplanned pregnancy, a lot of walking, strange revelations about childhood fantasies and toys, resurrections and really bad weather to go.

Gaiman doesn't wrap it all up neatly, with a happy ending for all, either. That would be boring and predictable, and not at all Gaiman's style. The wrap-up, in a small town in Kansas of all places, includes an extremely touching display of love and friendship in a hostile family environment.

Neil Gaiman's world just keeps getting bigger and bigger, the ride through his eyes, wilder and wilder. Unlike the previous volume, which was a collection of short stories connected only by their relation to Dream, A Game of You is an entire novel with excellent character development, emotional impact and, most importantly, a really good story.