The Sandman Volume 4: Season of Mists 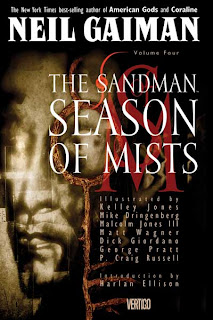 Those of a Christian persuasion accept Hell as a given.

Lucifer, the first of God's angels, rebelled and was cast out of Heaven, falling to Hell where he rules over the demons and the damned. But what if he decided he no longer wanted the job?

That's the basis for the Season of Mists storyline in Neil Gaiman's Sandman series. Morpheus goes to Hell to release an ex-lover, whom he condemned to Hell 10,000 years earlier after she spurned his love. (The Endless, it seems, are not good people to upset.) Morpheus isn't sorry for his actions until, at a rare family gathering of the Endless, his siblings chide him for his cruelty. So he sets off to Hell to right a wrong, fearful because Lucifer is one of the few beings more powerful than the Endless, particularly in his own kingdom, and he already bears the Dream King ill will from an earlier encounter.

He arrives expecting conflict. Instead, he finds Lucifer in high spirits -- and Hell itself is all but empty. Lucifer, we learn, has quit. He has banished his demons and damned souls from the place and locked all the gates -- and he gives Morpheus the infernal key.

That, we quickly surmise, is Lucifer's revenge. For what will Dream do with an empty Hell?

Almost immediately after his return to his own realm, envoys begin appearing making claims and offering trades for the empty territory. The Norse gods, represented by a cunning Odin, blustering Thor and sly Loki, want it as a haven so they may escape the deaths of Ragnarok. The now-homeless demons, led by Azazel, want to reclaim their home and rule it themselves. The ambassadors of Faerie want it so they can end their endless tithe to Hell. The Egyptian and Japanese deities each make a bid. Chaos and Order both lay a claim. And Heaven sends two angels as observers.

The banquet, with entertainment by Cain and Abel, provided by Dream for his guests, and the public and private negotiations for Hell are deucedly clever storytelling. A solution that won't cause strife among the great powers seems impossible. And we begin to understand just what Lucifer had in mind when he made his "gift" to Dream.

Meanwhile, on Earth, with no other place to go, the damned souls start returning. The story of two boys -- one living and one dead -- at an English boarding school is poignant, funny and sad, and the extra-busy Death makes a grand cameo appearance in tights and running togs.