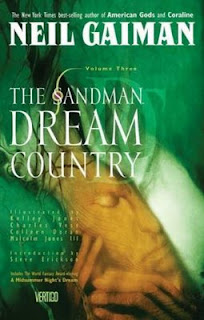 Neil Gaiman doesn't waste any time before hitting readers of his third Sandman collection with a series of disturbing images.

We have a writer, a man with one successful novel to his credit and a long train of writer's block ever since, who comes into possession of a large wad of semi-digested hair, freshly cut from a woman's stomach. He trades it to an older writer for possession of Calliope, one of the nine Muses, a prisoner who's been kept, naked and emaciated, in the old writer's attic for decades -- his personal Muse. But now he no longer needs her services and passes her on to the next would-be creative genius, whose first act -- after getting her home and installed in a musty old room -- is to rape her. And then he starts writing again.

There's nothing very pleasant about the story or its characters, although it does present an interesting perspective on some people's need to create, at any cost to themselves or others. As the young writer Madoc begins to reap his new found success, he makes and breaks promises to his captive, who he sees as nothing but an inhuman tool. And Calliope's efforts to call help attract only the attention of her mother, the three-in-one Fates, who are powerless to free her.

But then, Dream of the Endless learns of her fate. Although he holds no particular affection for her now, they did share love in the long-ago past -- even bearing a son, the lyrist Orpheus -- and he doesn't like the thought of her held captive. Unable to interfere directly, he gifts Madoc with ideas in excess, more than any mortal can hold.

And then, we have the cats.

The next tale in Dream Country is about the dreaming of cats, and their belief that dreaming can redefine reality. Woe to us poor mortals if they're right!

Unlike the two previous collections, Dream Country is a collection of four unrelated tales. There is no connecting storyline, no common characters but Dream himself -- and he doesn't even appear in the fourth one, the touching story of a metahuman created by the government, who never earns the kind of acclaim that most comic book heroes get. She is alone, bitter -- and unable to die. Thus, the Endless appearing in this story is Dream's older sister, Death.

But it's the third story in this collection which makes it most worth having. In the preceding volume, The Doll's House, Dream made a bargain with a fledgling playwright in Elizabethan England. Now he's claiming the first half of his price, and thus William Shakespeare sets out into the countryside with his troupe of actors to present a command performance of his latest play, A Midsummer Night's Dream.

His audience is none other than Dream and his guests, the true Auberon and Titania of Faerie, and their court of faeries including Peaseblossom, Mustardseed and, of course, Puck.

The performance is exquisitely presented, and the reactions of the Faerie court are delightful. As the Puck himself says, "This is magnificent -- and it is true! It never happened; yet it is still true. What magic art is this?"

Magic, indeed ... but nothing more mystical in this case than the incredible pen of Neil Gaiman.

This chapter is also one of my favorites because of the art, masterfully drawn by Charles Vess. Vess has a true knack for the faerie realms, and it turns out he does good Shakespeare, too.

Of extra note in this volume, Gaiman has printed the script for "Calliope." It's not particularly exciting to read -- it works better as an illustrated story, which is, after all, at the beginning of the book -- but it's an interesting insight into the way a comic script is prepared and submitted before the artwork is done. There are margin notes by Gaiman and illustrator Kelley Jones for additional exposition.