The Sandman Volume 2: The Doll's House 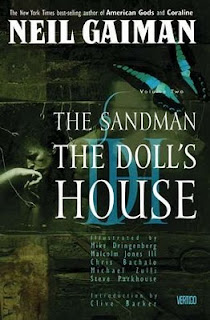 The second collection of Sandman books begins, oddly, with the same story which ended the first one. I don't know why writer Neil Gaiman and/or DC Comics officials decided to print it again, but I'm not complaining. The bittersweet story of Death and the final moments of the humans she meets on her rounds is a good enough piece of writing that casual readers of the series -- those who pick up a volume or two but don't collect the whole set -- deserve to read it.

The second tale in The Doll's House seems at first glance to be a filler. It recounts the oral tradition of an aboriginal tribe, and the story being told as a rite of passage for one young man is about an ancient race who lived there, and their queen who dared to love -- and reject -- Morpheus, the King of Dreams. Gaiman does an excellent job of capturing the oral style, peppering the tale itself with superstitions and lessons -- the most important of which may be, never fall in love with powerful, god-like beings. The story also sets the stage for later events in the series.

The bulk of the remaining collection is taken up by "The Doll's House" storyline. It begins with secret plottings between the androgynous Desire and the grotesque Despair, two of the younger Endless who seem to bear their brother Dream ill will. Cut to a plane en route to England carrying Rose Walker and her mother, the unknowing daughter and granddaughter of long-time sleeper Unity Kinkaid. Rose, when she sleeps, peeks directly into the Dreaming, inadvertently spying on the Dream Lord himself. During Dream's conversation with his aide Lucien, we learn that several major dreams have vanished from the Dreaming. (This will become important in the next book.) And we learn that Rose is a vortex of dreams, and that Morpheus is aware that she's eavesdropping.

Later, after some vague warnings from the three Fates, Rose jets back to the States to continue her quest for her missing younger brother. She takes an apartment in Florida and meets her transsexual landlord, Hal/Dolly, picture-perfect neighbors Ken and Barbie, and the mysteriously veiled Chantal and Zelda. We learn of Gilbert, the large, kindly man upstairs, and briefly meet Jed and his dream-friends, "Sandman" Hector Hall and his three-years-pregant wife, Lyta. We learn of the mischief of escaped dreams Brute and Glob, and the fate of Rose Walker's missing brother.

If all this sounds confusing -- it is. At least, it's hard to summarize, but Gaiman somehow manages to present his tales without a word squandered or poorly chosen, weaving numerous characters and plotlines into a tapestry which will span the whole 75 issues of the series.

The story comes together when Rose and Gilbert, on their way to find her brother, stop at a rural hotel ostensibly hosting a convention for cereal growers. It is, however, a gathering of serial killers -- and Gaiman is hitting his stride on some of his most disturbing work yet. The characters here discuss terrible murders and mutilations with the casual indifference that farmers might use to discuss the year's grain crops. The scenes are funny in a way -- a collection of oddly dressed nerds with "Hi, my name is _" name tags who seem, by appearance, better suited as comic book conventioneers than hardened killers. The chit-chat and panel discussions are a riot.

Somehow, Gaiman works the story of Little Red Riding Hood -- or, rather, the fairytale which preceded it -- into the mix.

And it's here we meet the Corinthian, the most sinister of the escaped dreams. And things get seriously weird, and at times violent and bloody. And the confrontation between Morpheus and his strayed creation is potent stuff.

When that's all settled, Dream still must deal with the wayward vortex, Rose ... and there's only one thing he can do with a vortex.

The volume also contains an excellent filler piece which, again, sets the stage for later events in the series. It is 1389, and Death brings Dream to an English tavern so he can experience a touch of mortal life. There we briefly meet Geoffrey Chaucer and, more importantly to the tale, Robert Gadling. Gadling is your basic peasant fellow who has passionate beliefs about death -- or, rather, about avoiding it. The two Endless decide to grant the man's wish, and Dream strikes a bargain to meet him again, in that very same pub, in 100 years.

This begins a tradition of meeting every century, and Gadling keeps Dream up to date on the course of his life. For two centuries Gadling prospers, and it is on their their meeting, 1589, that Dream stumbles on yet another mortal whose passion intrigues him. Will Shaxberd, who "acts a bit, wrote a play" complains to friend Kit Marlowe about his lack of talent. Dream decides to tender a deal -- again, a storyline which resumes later in the series.

By 1689, Gadling has fallen on hard times. And so it continues on to the present. If anything, the tale demonstrates the human zest for life no matter what the cost or condition.

If anything, The Doll's House is superior to the preceding book. The major storyline begins makes major strides towards establishing the Endless mythology, and the subplots give Dream and his cast of supporting characters some real, three-dimensional personality.

Those reading through the series for the first time should, by this point, be hooked.