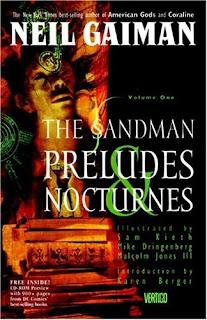 There have been some major, pivotal moments in the development of modern comics. One was when Frank Miller decided to do a set-in-the-future Batman story. Another occurred when someone at DC Comics asked Neil Gaiman to resurrect the Sandman.

The Sandman, pre-Gaiman, was a goggled hero who put baddies to sleep 'til the cops could show up. For some reason, the DC bigwigs wanted to bring him back into circulation. A lesser writer might have complied. But not Gaiman, who instead convinced the DC editors to let him devise a new mythology -- something related to the old Sandman in no way but name.

For 75 issues, Gaiman held his loyal readers spellbound as he unfolded the tales of Dream (the Sandman, a.k.a. Morpheus) and his Endless siblings: Death, Destiny, Desire, Delirium (formerly Delight), Despair and the missing Destruction. Most of the books in that series have been collected in trade paperback reprints, the first of which was dubbed Preludes & Nocturnes.

If you have any fondness for exquisite storytelling in a graphic medium, do not miss this book.

The tale begins in the England of 1916 when a group of would-be mystics try to call and capture Death. Instead, they get Dream ... and for the next 70 years, Dream -- an incarnation older than the gods themselves -- is held prisoner. Finally, someone is careless and he breaks free ... and the story really begins.

Taken from him when captured were three tools of power, three items which carry much of Dream's self inside them. To regain and rebuild the realms of the Dreaming, he must retrieve them, but of course they aren't going to be easy to find.

This is the only sequence within the Sandman series which freely, if briefly, interacts with the mainstream DC universe. Dream, in his quest, meets some members of the Justice League of America. He is led through Hell by the sometimes-hero/demon Etrigan. He enlists the aid of John Constantine, star of the popular Hellblazer series. We even pay a few visits to Arkham Asylum, the occasional home of Batman's arch-foes.

His first quest is in the company of Constantine, a hapless hero whose friends and lovers always seem to pay a heavy price for knowing him. In this case it's his ex-girlfriend Rachel, who has become addicted to dreams. Wait 'til you see her wallpaper....

Next, Dream is off to Hell, where a double-mouthed archdemon has acquired his helmet. To regain it, Dream makes a bargan with the devilish triumvirate, Lucifer, Beelzebub and Azazel, and contends in verbal competition with the infernal duke Choronzon -- a contest reminiscent of the sparring match between Merlin and Madam Mim in Disney's The Sword & the Stone.

It is the third quest which carries the heaviest impact of this book. An old DC madman, John Dee (a.k.a. Doctor Destiny), escapes from Arkham after an amusing encounter with Batman badguy Scarecrow, and sets out to take back the dream-filled ruby he'd stolen years before. The end of his journey, a passenger in a hijacked car, is shocking in its abruptness. Then, ruby in hand, he goes to an all-night diner ... and waits.

He knows, somehow, that the Sandman is coming. He passes the next 24 hours manipulating dreams and realities on a global scale, taking particular interest in the handful of diner patrons who had the bad luck to be there at the time. He toys with their minds and imaginations with increasing malevolence, and the reader is pulled along with morbid fascination in the same way it's impossible not to look when you drive past a car wreck. This isn't fun reading -- but it's powerful.

Dream and Dee finally contend, as we know they must. And the end, while inevitable, is still surprising in the way Gaiman gets us there.

The last chapter of this collection is the best story of the set. Dream, troubled by his long captivity and the events following his release, is passing an idle hour feeding birds in a busy roundabout on Earth when he is visited by his worried older sister, Death.

This is our first glimpse of the character who, more than any other in the Sandman series, made her way into public consciousness and developed her own mythology. Death, we learn, is an attractive young female, pale of skin and raven-haired, who has an endless fascination for life and a passion for living. She's more cheerful than anyone has a right to be.

She takes Dream with her during her rounds, and her interactions with the dying of many ages and lifestyles is touching in many ways. By day's end, Dream has learned a lesson about life -- and so, if they were paying any attention -- have the readers.

This initial run of the series introduces us to some characters who will play major roles over the next few years: Cain and Abel, the killer and victim of the First Story and now caretakers of Mysteries and Secrets in the Dreaming, Lucien, the gangly librarian of books never written. Unity Kinkaid, who slept her life away and whose granddaughter will have a significant impact on Dreams. And, of course, Death, the perky reaper herself.

Illustrations for this part of the series were provided by Sam Kieth, Mike Dringenberg and Malcolm Jones III. It's not the best art I've seen in a comic book, but it's better than most, and it strikes a nice balance between realism and cartoony imagery. Frankly, if the art were any more realistic, there are pages here I wouldn't want to see.

Honestly, if I ever had to give a perfect 5/5 rating to any trade for the writing alone, The Sandman series would have it. That's all for now. But don't worry, there's more. The Dreaming, like Dream himself, is endless. I only wish The Sandman had been as well.