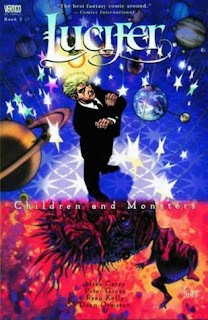 
The second book in Lucifer's saga takes him to Izanami, an eastern death goddess and an afterworld very different from his own. The Fallen One seeks to reclaim his wings, severed from his back when he relinquished Hell and now reposing in a dusty collection of symbols and icons. But there are challenges that must be faced and conquered before he gains his prize, and the gods of that place are not eager to see the treasured wings taken.

Meanwhile, Lucifer's lover, the half-faced demon Mazikeen, is left to guard his Los Angeles nightclub and, more importantly, the mystical gate to the Void that Lucifer has opened. The gate is a great power, and it draws the attention of infernal and blessed beings from many plains who wish to steal it. (British bad boy John Constantine even makes a brief cameo here, but only as an amused observer.)

There are several cameo and guest appearances of interest in this volume, including a tarot-ridden sorceress, an angry seraph, a young ward of dead witches, a murdered schoolgirl's ghost, a maker of half-angels and a former handmaiden to gods who has miscarried every morning for 4,000 years. (If you want to see rage and destruction unleashed, imagine the spirit of an unborn fetus that's been miscarried more than a million times.)

The story is good, the art is alright, but my biggest issue is with the lettering of all things. I know that Vertigo wants to maintain a certain feel with this series, and I applaud the attempt. I sincerely wish that they would use better fonts so I would be able to clearly read the story and enjoy it for what it's worth. Because of this lone fact, I haven't given the Lucifer series much interest. It simply doesn't keep my attention or draw me in.
Posted by John "Zanziber" Rogers at 6:00 AM
Email ThisBlogThis!Share to TwitterShare to FacebookShare to Pinterest
Labels: #ThrowbackThursdays, Reviews